The tide’s timing beckoned a trip out to Bull Island on Sunday before Labor Day. In contrast, the marine forecast of east at 10 knots was not panning out. With sail raised I paddled across the Intracoastal Waterway toward Andersonville Creek. The wind did not have an identity, and veered around during the long trip out to the island from north to south, dropping off completely at times. The initial paddling brought to mind canoeing, and a projection ahead to a canoe trip on the Little Pee Dee River on the autumnal equinox. I reflected later that it would have been a faster paddle over to the island by canoe or kayak, rather than mostly beating to windward in Kingfisher in the fickle breeze.

The limited wind brought out a new crop of hitchhikers – small biting black flies, enjoying hanging out below deck in my cockpit, and nipping at my feet and ankles. They are not as voracious as the green-headed flies, but still annoying. The lack of wind revealed a blessing in disguise – quiet, and the sounds of nature. The dull sound of surf on the island carried across to the entrance to Andersonville Creek. Fish rippled the surface, and the beating of a great egret’s wings was heard before the bird was sighted moving away over the marsh. At the Shark Hole where I turned to the southwest toward the ferry route, an osprey flew past and descended at a low angle until hitting the surface hard. This bird of prey took off immediately, and the readjustment in flight suggested that the dive was a fruitful one.

Along the ferry route, one of a number of holes in the wind provided the opportunity to observe a pair of wood storks beginning to circle, soon joined by others until a dozen were working on getting aloft on rising air. I became aware that my sailing focus on horizontally moving air is two-dimensional compared to my avian companions. Farther along, a large splash exploded astern, and the dolphin made a second leap and plunge as an encore. The tide had already turned when I landed Kingfisher at an empty public dock, with the refuge dock also void of boats.

Alone on the island, I headed to the entrance to the Turkey Walk Trail, the beginning section winding through the maritime forest and the edge of the marsh. Shell midden lay exposed in several areas of this trail, probably more visible than on the Midden Trail. 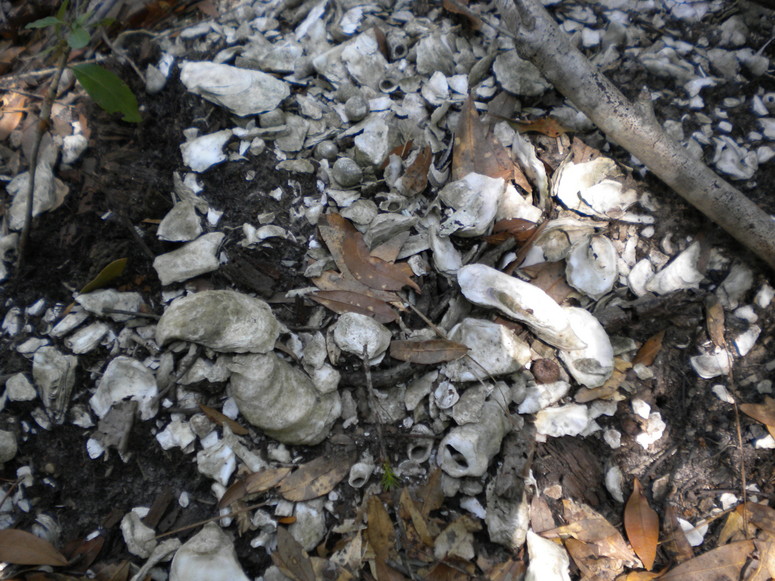 A vine’s flowers caught my eye along the way: climbing butterfly-pea Centrosema virginianum, one of a number of wildflowers blooming on the island. It is a common flower throughout the SE including the Piedmont, and in other locales including maritime forests and even the power line easement next to my property. 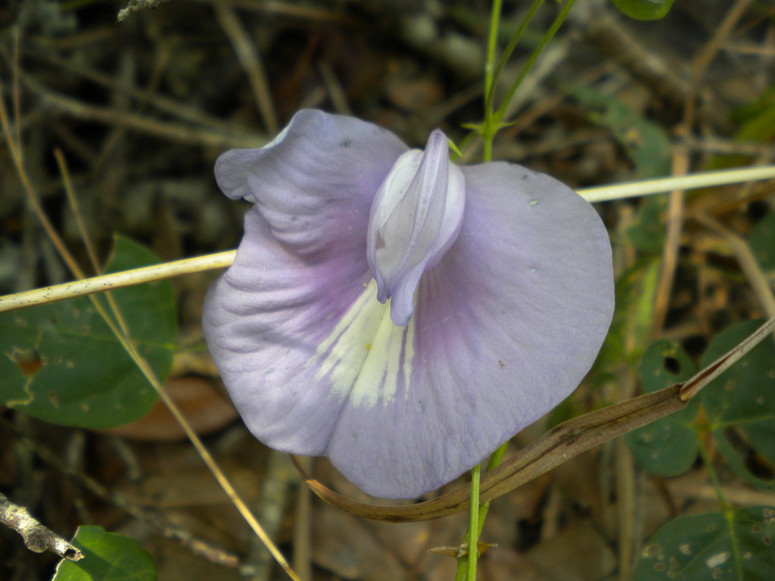 A stop to photograph these blooms gave me the opportunity to further survey the mosquito population in the forest. It had been fairly light so far (especially relative to last fall), but a minute or two brought ten or so to each uncovered arm, but not enough while on the move to need a long-sleeved shirt.

The splash of an unseen alligator in a narrow creek announced the entrance to the Summerhouse dike, the wide pathway between the Lower and Upper Summerhouse Ponds. The openness of this dike contrasts with the forest trail. It was too warm on this day for alligators that will sun on this grassy section in the cooler months. More wildflowers lined the edges along with two colonizers: dog fennel, and the invasive Chinese tallow tree. The refuge has made large efforts to eradicate this aggressive alien, both by hand and aerial spraying, and the battle continues.  Vistas opened up on each side of the dike to the impoundments. 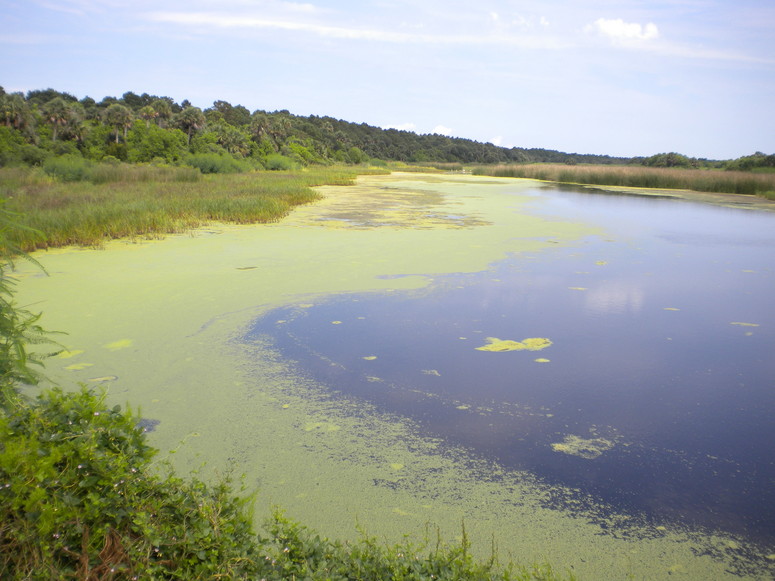 Several varieties of butterflies meandered around, and in the background the surf sound was low and steady.

Leaving the dike to rejoin the continuation of the trail in the maritime forest, I cut through a firebreak leading to the Mill Road. It was quite overgrown, but with shoes and long pants on I was comfortable stepping through the knee-high vegetation.  The Mill Road was not far, and a turn to the right took me toward the southwestern end of the island. Old dunes loomed high along this sandy road, often with a canopy of live oaks stretching overhead. The wonderful brilliant-colored fruit of the beauty-berry Callicarpa Americana graced the sides of the road. 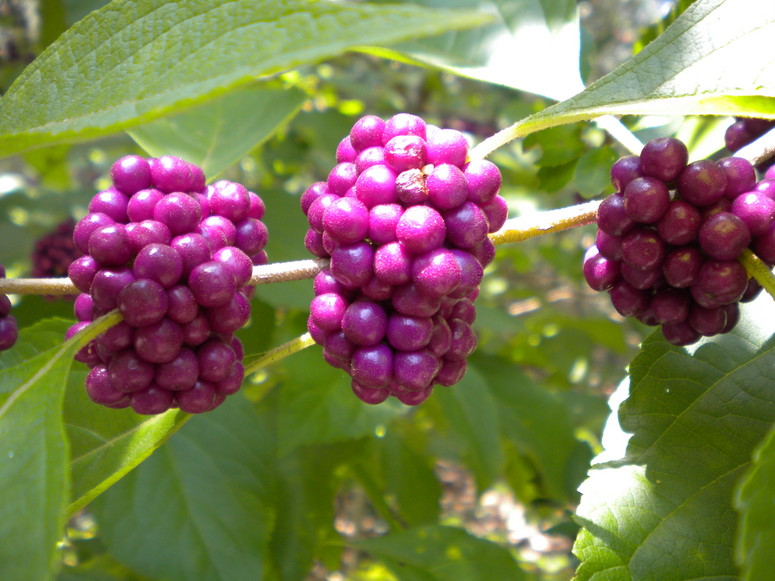 It was about a mile and a half to the southwest until the outlet appeared to the beach. The Mill Road past this intersection is closed between April 1 and September 1 due to a wading bird rookery. It had been a while since my last trip out to the beach here. This outlet provided a nice round trip loop back to the dock via the Beach Road, about two miles down the beach. The final crossing of the dunes appeared with no sign of past human travelers.

There was a tad of disappointment at this arrival on the strand: the wind continued elusive, the surf was small, and the imagined piles of flotsam from storm surf courtesy of Hurricane Earl a few days before were absent. There was no sign of humans, excepting a shrimp trawler working close to Price’s Inlet. I stopped for a refreshing repose in the ocean. The beach was wide, and more was revealed with a closer inspection. A sea urchin at the high tide line displayed its fivefold radial symmetry, much like its sand dollar and starfish cousins. 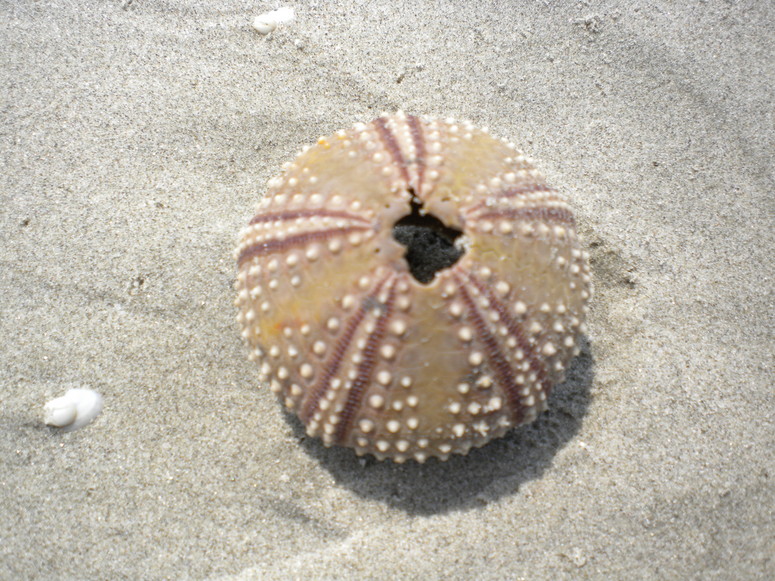 The delicacy and geometry of the calcareous skeleton makes them a beautiful find, and a challenge to carry home in one piece.

Another set of skeletal remains was intriguing. There was a body-like section, and a vertebral column held on by some flotsam. Considering different possibilities, like stingray, I decided to send a photo off to naturalist Rudy Mancke. 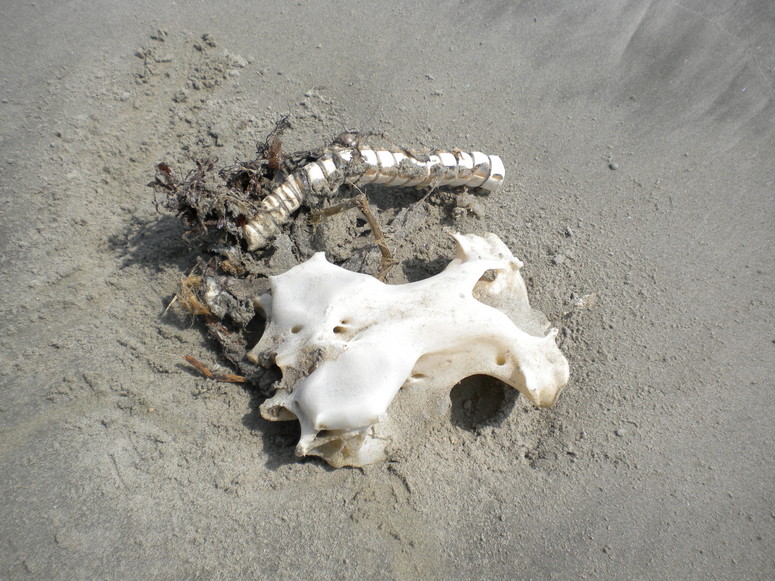 I have sent him several questions in recent years, and have always received an answer to my queries. On several occasions I have heard from friends that he used the questions as topics for one of his Nature Notes series on ETV radio. Sure enough, Rudy identified the remains as a shark (at least I was in the neighborhood – same family as rays).

Several years ago, in the general neighbor of this shark skeleton, I discovered an amazing object. I noticed something sticking up several inches above the sand, and I wandered down toward the water just for curiosity. Thinking it may be just a bit of buried wood or even garbage, the object appeared to be mostly buried. The excitement grew with the digging as I finally pulled up what appeared to be a skull. It definitely was not loggerhead, but what kind I did not know. Rudy Mancke through the aid of my photo made a quick identification: the skull of a bottlenose dolphin.

If the jaws were not missing it would have been easy to ID. Seeing the size of this skull reinforced my admiration for these powerful and magnificent mammals with impressive cognitive abilities. That specific skull now resides at the Sewee Visitor and Environmental Education Center, and is utilized for educational programs.

Reaching out to others for their knowledge and wisdom is a way of learning I am practicing. It is a humbling process in many ways, and a very good thing. I have experienced many people that have brought new knowledge or insight into my endeavors, and often the contributors are much younger than me. There are various reasons to not do so. In processing this day, I asked and received help from both Rudy Mancke and John Brubaker (thanks John!). I work with patients in therapy to understand the value of reaching out, and the barriers that keep us blocked off from this aid. As in other areas, regular personal practice continues to help me grow.

A piece of a loggerhead sea turtle lay on the beach. Ahead pieces of loggerhead eggshells were strewn around a large ghost crab hole, though the location in the intertidal zone puzzled me. 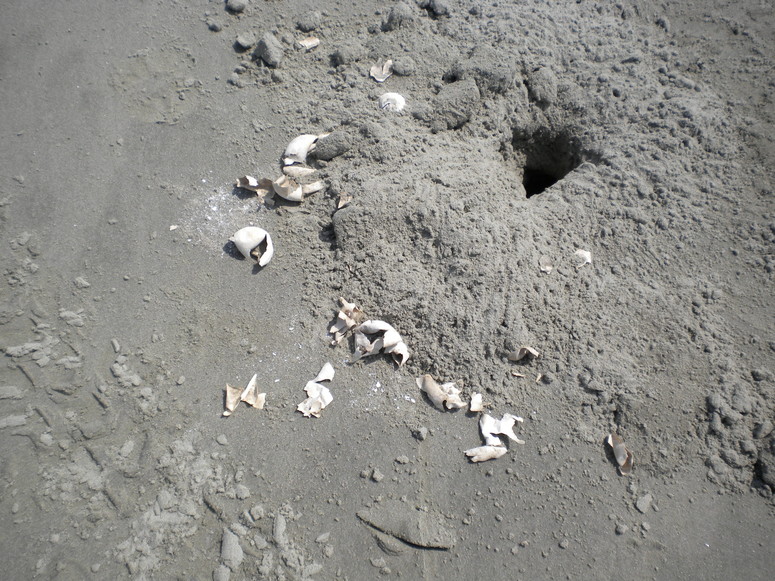 My neighbor George Leydic, who volunteers one day a week on Cape Island in the loggerhead program, proposed a sound explanation. After staff and volunteers have inventoried each hatched-out nest on Cape, Lighthouse, and Bull Island, the remains including eggshells and unhatched eggs are buried close to the water’s edge. A ghost crab, well suited for this foraging, had found this burial, and most likely some very ripe eggs.

Long pants were not necessary for the walk back across the island. Of interest were the all but dry impoundments on either side of the road. They were filled with a riot of tall plants: big flower vetch, another invasive colonizing this damp place, as well as ditches in my community. 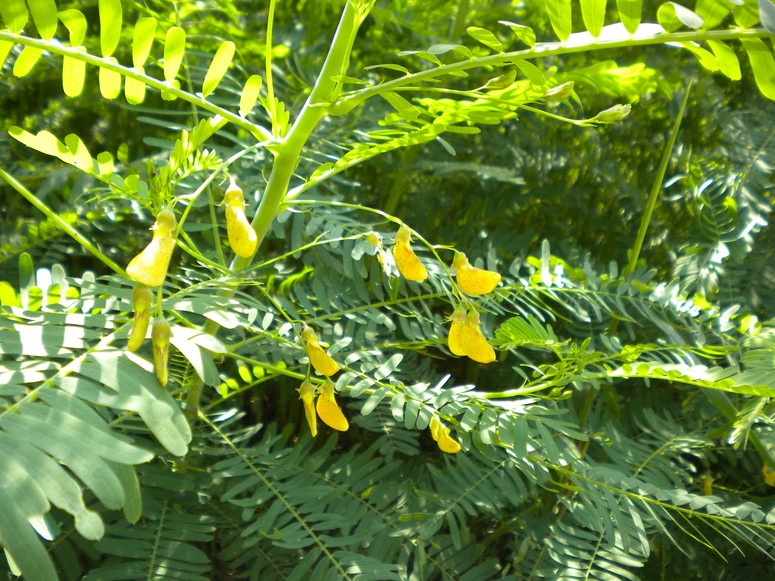 I arrived back at the dock, not having seen another person on the island. The wind was still light but at least solid, and I was favored with both the wind and tide at my back for most of the way. I sailed during the last hour of incoming tide, and recalled, in the luxury of this high water, a nice shortcut from the usual ferry route to the Waterway and home.