Saturday
Perhaps it was missing the ideal voyage window last Sunday out to the island – outgoing tide and southwest breeze. The conditions were there, but circumstances did not allow. I counseled myself on patience. So Saturday I waited for the wind to come up, and waited. Not the best tide – it would be outgoing all afternoon, and I would have to come back against it. The marine forecast was not giving me the solid breeze I wanted to return to the mainland. Having resolved to wait until Sunday, the trees stirred in my yard in only a way the new sea breeze can move them. I turned in a flash, finished grabbing necessary gear and trailed Kingfisher to the landing.
We were soon sailing out Andersonville Creek, headed to Bulls Bay and the Northeast Point. Sailing along automatically, deep in my head, I told myself to look around and observe. Past the next bend in the creek, I saw in my wake a loggerhead staring at me for a couple of seconds before making its dive. The sailing was smooth out the creek and across the Bay, and the wonderful conditions brought us in good time to the point, occupied already by a couple of boats.
Beginning the walk around the point toward the south, my eye was attracted to the sand isle to the north. 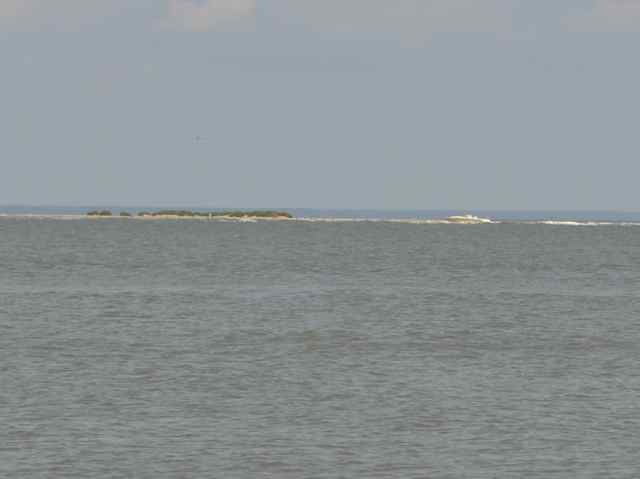 My distance vision was impaired without my glasses (broken and left at home), and it appeared that the island was covered with a roost of birds, most likely pelicans. Yet there seemed to be a greenish tint to the feature above the sand. An abandoned hull was still beached on the east side on shoals. Back on Bull Island and around the point roosts of numerous birds including black skimmers and terns covered the intertidal zone, exposed more as the tide fell. I left the beach quickly to enter the Jacks Creek dike through the maritime forest on Lighthouse Road.  In the forest a beauty-berry lit up the side of the path, and more of these bushes were splashing color along the dike along with a few stands of passion flower. 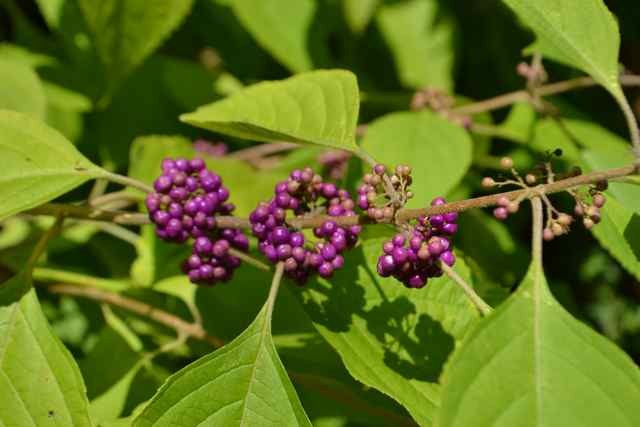 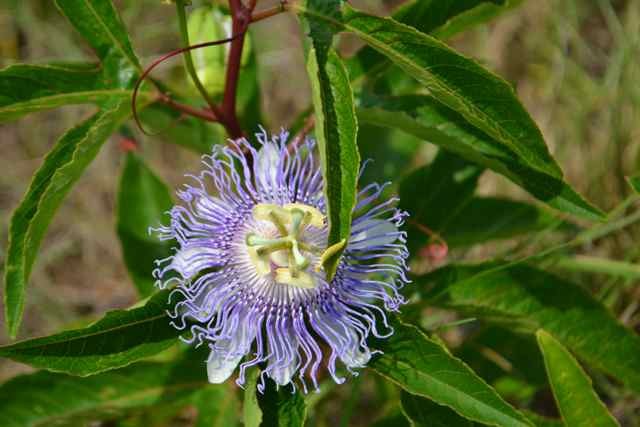 I did not expect to see a vehicle along the dike, but from behind came along an acquaintance from the loggerhead program, Jim Hawkins. Jim during the season spends much time doing the turtle conservation work on Bull Island, though works year round as volunteer for Cape Romain National Wildlife Refuge. 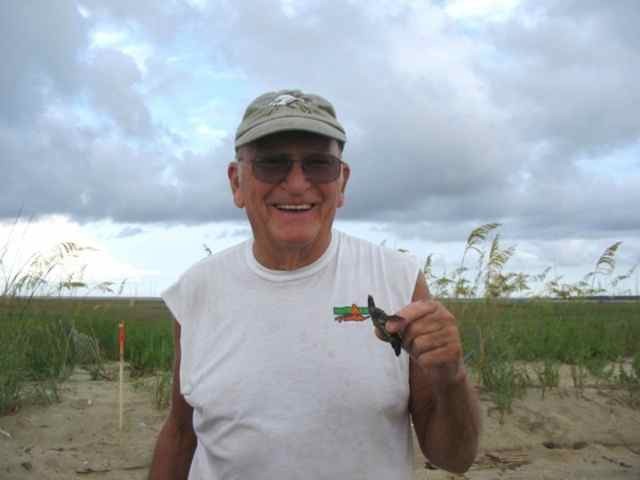 Photo courtesy Michelle Pate
He falls into the category of super volunteer – Cape Romain has a few whose stewardship of the refuge is remarkable. What Jim gives to Cape Romain goes beyond just hours logged – an unfathomable number since 2002 (over 5200 hours! He also found time in this period for major heart surgery.) He has taken various USFWS training classes for equipment, and has found ways to help maintain equipment beyond the scope of the refuge staff. He told me that the island has seen its last nest, and the total was 130 for this season.
Various wading birds occupied both Jacks Creek and the marsh to the east. 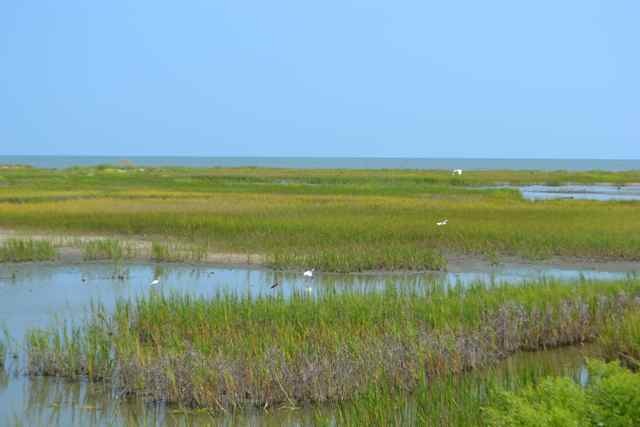 The view from the secondary dike behind the breached dike was disconcerting, with the inexorable march toward a future breach of the newest dike in a matter of years. 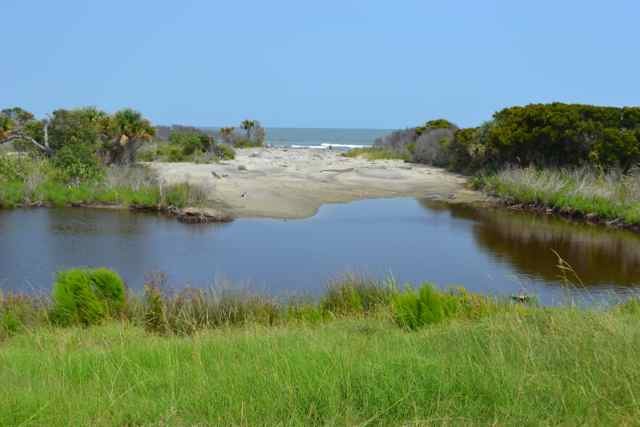 The water was surprisingly high along the Boneyard when I arrived, and on the walk back toward the north it was necessary to wade around places where the surf rolled into the salt-killed vegetation, despite the fact that it was three hours after high tide. 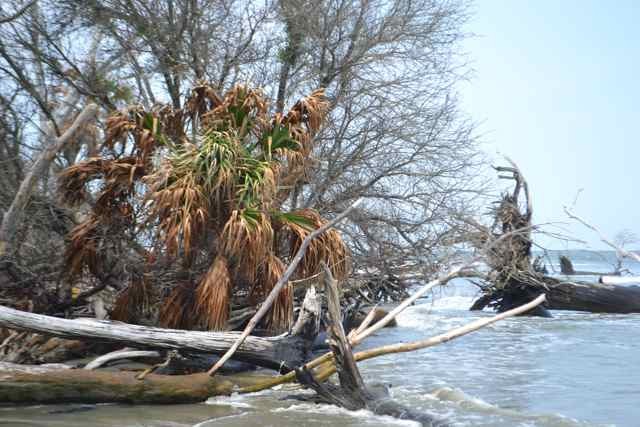 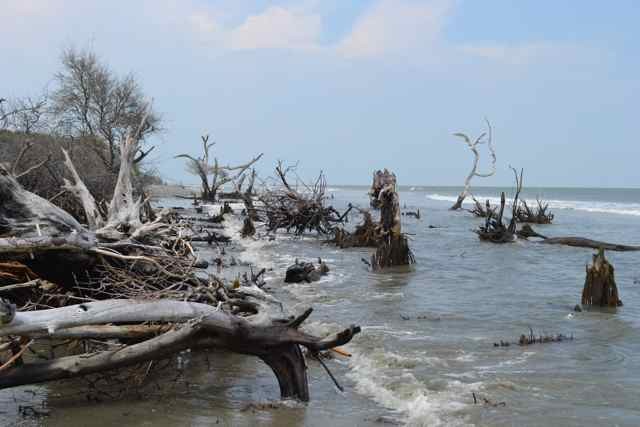 More roosts appeared along the strand, especially in a usual place (I labeled this in the past as the Waiting Beach). 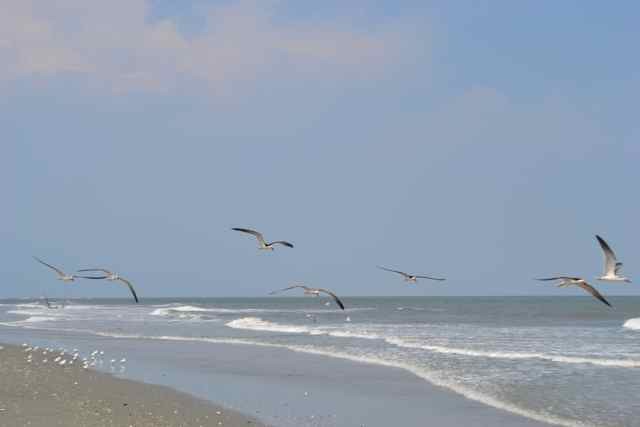 Again skimmers and terns along with gulls were prominent; other shorebirds including marbled godwits skittishly flew off before I could get within range of my small lens. Finally back at the Northeast Point, I was alone, without another boat in sight on the Bay. 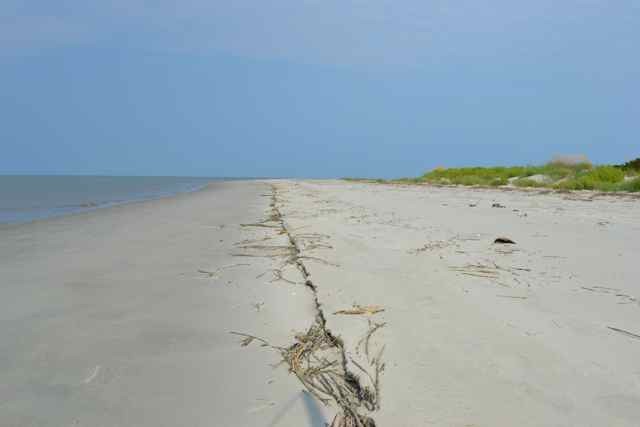 On the return leg home, I noticed a boat coming out of Bull Creek and cutting across the Bay as if to head into Venning Creek. He abruptly turned around and headed south toward me. Coming around my stern, I noted his DNR shirt. He introduced himself as Angus McBride, and was just coming to check on me, making sure I made it off the Bay. I thanked him , and asked him about the little sand island to the north of Bull. He confirmed my hunch that vegetation was taking hold. Commenting on the abandoned hull there, he stated that the USFWS was developing a plan to haul it out and add to an artificial reef.  We took leave for our respective trips home, and I sailed through a couple of holes in the wind against the tide to make it to the landing before low tide.

Sunday.
A stronger sea breeze, outgoing tide, and a desire to visit the accreting sand isle inspired another sail, starting later in the afternoon at 2. Once past the Shark Hole, we planed out into Bulls Bay, gradually picking up some waves to ride on the broad reach with the little key as the destination. The course was more to the east of the usual heading to the Northeast Point. Splashing from the waves was refreshing. From a distance, it appeared that a little black cloud lifted off the isle -in reality a flock of birds were moving as a group. On the final approach, waves were beating on the isle all around. The downwind was most protected, and I chose it for the landing, just beyond a section of floating wreckage beached on a little point. 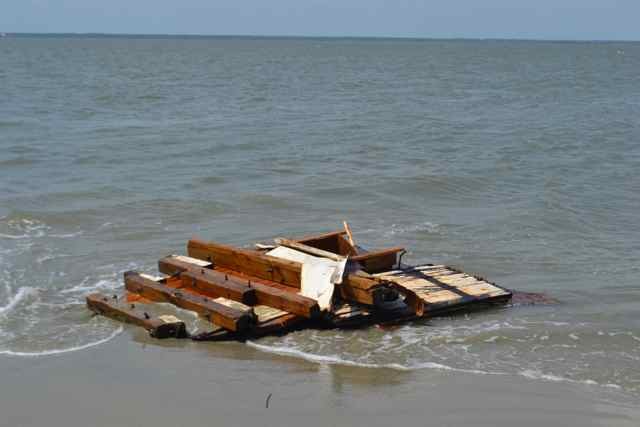 The opposite point of the island was the location of the stranded hull.
I had seen a couple of posts in the distance, but from this point could see the signs were official Closed Area markers, used to post bird nesting areas from the White Banks and Marsh Island to the bird nesting areas on the north and south ends of Cape Island. 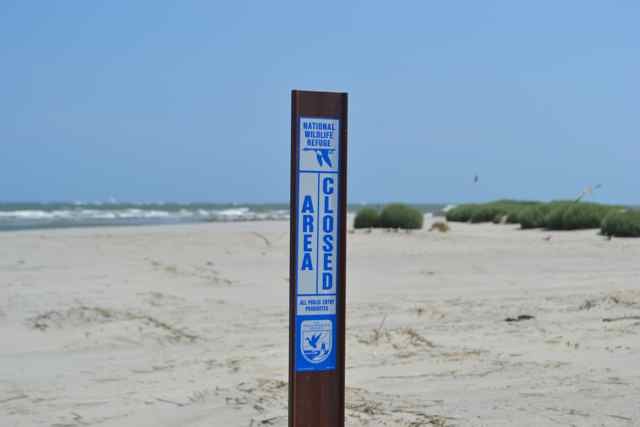 I had to abort my walk-around plan, and just observe from the little peninsula I stood on outside of the restricted area. The vegetation had shot up up in bunches in the middle of the isle. 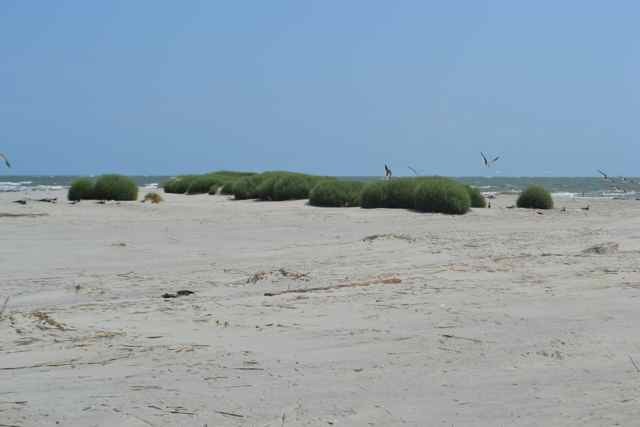 I could not get a close look but speculated that these were the familiar dune colonizers: sea rocket. My recollection from a visit the previous year was that these plants were not present. I recalled seeing numerous shorebirds feeding on horseshoe crabs at that time; black skimmers were a predominant bird on this day, and appeared to be nesting in the middle of the isle.

The location for nesting was a good way away from the predators on Bull Island. 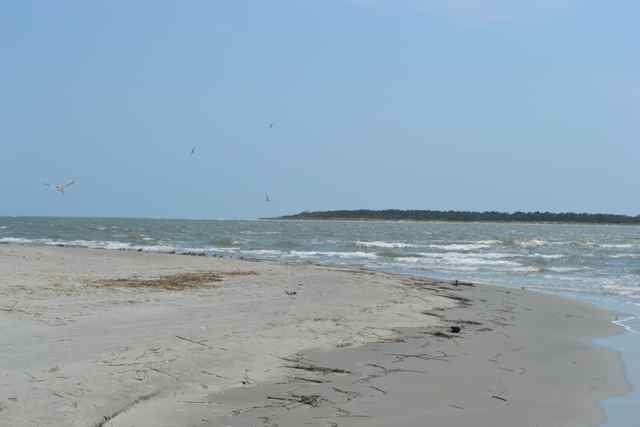 My visit cut short by the restricted area, I began my sail back across the Bay. It would be a long port tack, and substantially more work close reaching and banging through waves. I carefully steered through waves to soften the impact on Kingfisher. A different slapping sound came from windward, and skipping across Kingfisher‘s bow deck came a needlefish – a two foot silver lightning bolt. Off to leeward, it skipped across the water a couple more times for good measure before returning below the surface of the Bay, and leaving one sailor impressed and startled. I wondered what might have been if the fish had been five feet aft, and struck or even impaled me. (I mentioned this story to neighbors a few days later, and heard about the story of the woman kayaker being impaled in Florida.)
I was off on my course to the mouth of Andersonville Creek, and needed to come up to close hauled and make several tacks. I cut the point too close, and fetched up with my daggerboard on an oyster reef, crunching to a complete stop. Using my sail and sailor’s oaths to get off, I came into the creek, and the strong wind provided the power to oppose the tide without problem and make it to the landing with plenty of wind and water.