Dread, excitement, a mixed stew of anticipation – of what? I had heard the initial observations from Billy Shaw who had traveled over to Cape Island the previous day with Cape Romain’s refuge manager Sarah Dawsey. The report was staggering – perhaps 200 loggerhead nests lost. It was news feared by those associated with the loggerhead program, and by friends of this sea turtle everywhere who know the importance of this island to the species. So on this Sunday morning, August 28, a day and a half after the passing of Hurricane Irene up the coast (in fact at that exact time hitting the New Jersey shore), I headed over with Billy and two other staff to Cape to help “pick up the pieces”. Before sunrise, Billy “splashed” Jim Hawkins and a refuge boat in the water at Garris Landing in order for JIm to survey the nests at Bull Island prior to our group heading up to McClellanville.
After a quick look at LIghthouse Island, and seeing that the equipment had fared well, we crossed the sound with smooth waters and came upon the first casualty to our eyes: a broken pier on Cowpen Point. 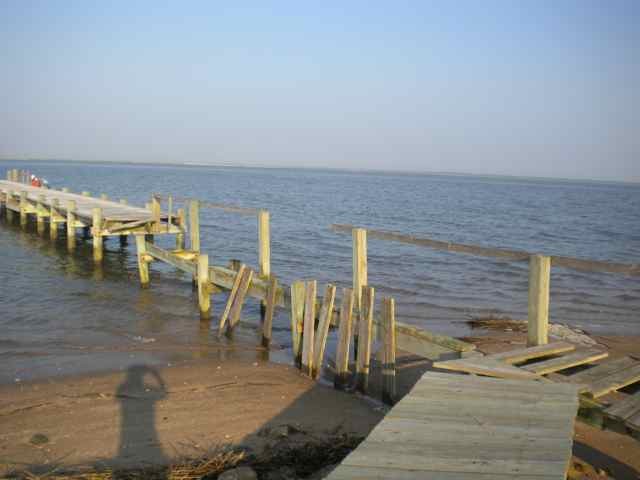 The inner section of the pier connecting with the island was not usable, and we offloaded our equipment on the beach. I was pleased to see that the pines of the island’s maritime forest were still standing, but we soon found places (never before seen by refuge staff) where the tide and waves had come across the island, and left standing water. The arrival at the beach was abrupt, since the distance to the water was shortened. The equipment area was wrecked, and we spent time unloading the fiberglass storage boxes of soaked supplies, tools, and debris. The view to the south from the high point of this area was impressive this close to high tide: water covered the island about a half mile to the south (the same location where an inlet had been cut by Hurricane Hugo). Irene had breached the island two more times to the south. (See SC DNR photo).
With no way to venture south at this time, we headed north to the hatcheries. The flattening of the island was apparent on this passage – long sections were without dunes. 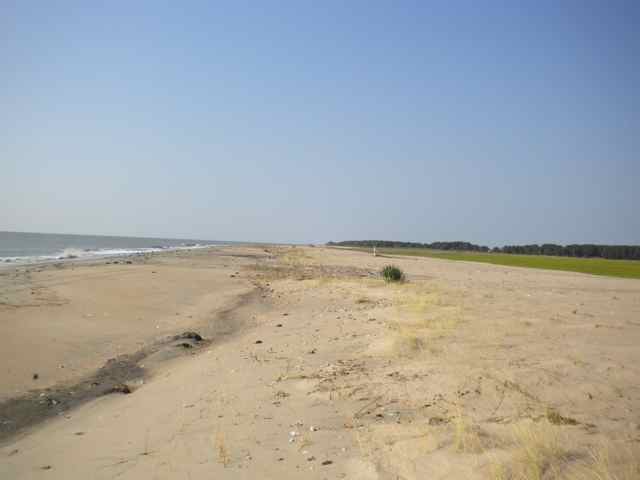 There was no sign along this stretch of the nests previously located here.  When we finally arrived at a major section for nests (both in situ and relocated), the next major consequence was startling – flooded and buried nests, with some having several feet of sand covering cages and most of the pole height. 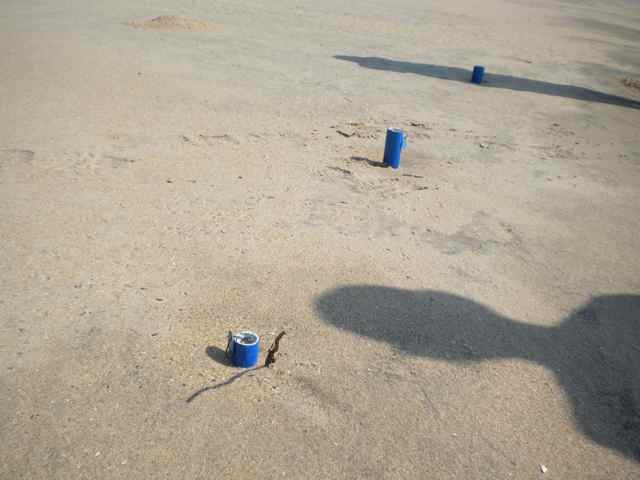 The final toll will not be known for a while, but the viability of these nests at a minimum will be compromised, and for some perhaps a total loss. (I learned from my neighbor and one-time-a-week volunteer George Leydic that the nests are being dug out. Not as simple as it sounds – for each section of relocated nests a large trench is being dug to reach the cages. The inventory of nests, necessary for data collection, is also problematic, since a much bigger and deeper hole is needed, and the distance to reach the remains in the nests is further. With shovels and sweat, the massive job will get done.)
The island was also littered. We had to weave our way on the ATV and trailer around large chunks of marsh sediments broken up by wave action from exposed sections on the beach. 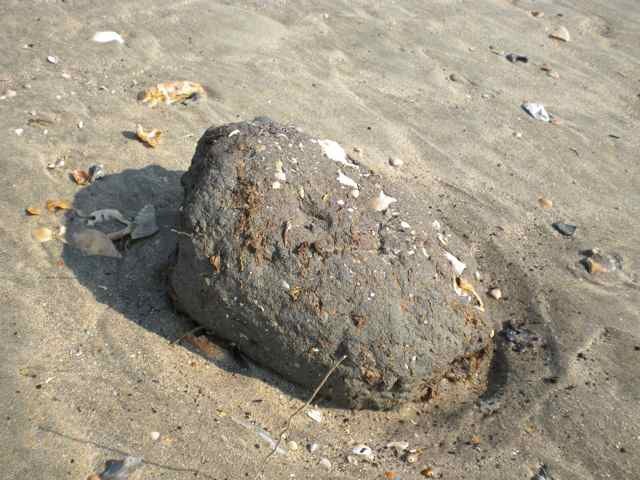 Some eager volunteers in the past have accepted the identification of these chunks as whale poop. An incredible assemblage of shells was deposited at the high tide line, and stretched out as far as the eye could see. 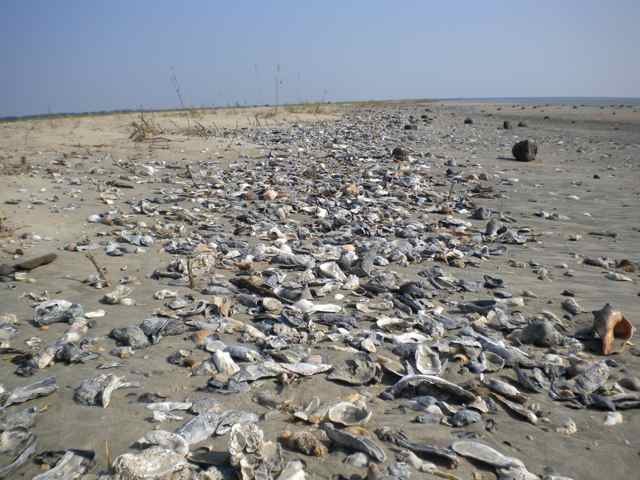 We also came upon places in the intertidal zone with concentrations of dead sea stars. There were occasional chunks of coal, artifacts from a time when this ore was transported in vessels for use as fuel on land and sea. 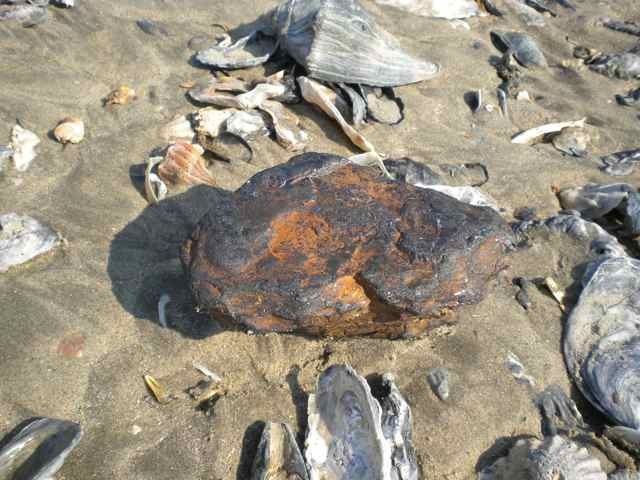 After the tide had gone out for a few hours, we headed south and were able to cross the first breach with the receding tide. This section and several areas beyond were places where the island was scoured. 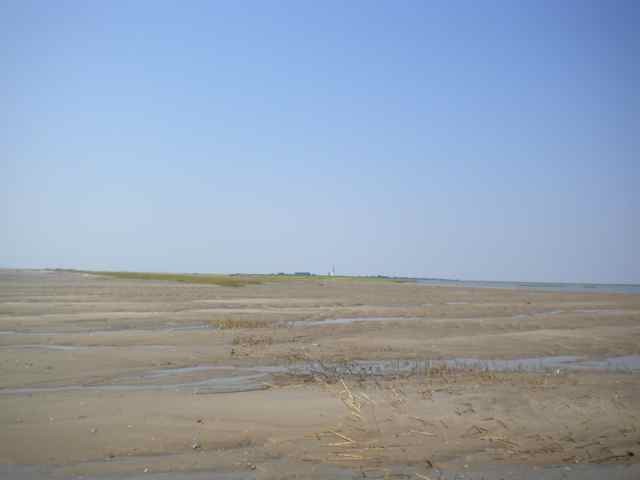 Prior to the storm these three sections were little more than  narrow strands of crowned sand with no higher ground or marsh on the backside. The storm had scraped the sand off the narrow strand and deposited in the sound behind the island. Billy Shaw thought that there would be aquaculture works covered up by this sand. Interestingly, we saw old aquaculture stakes jutting out of the middle of the island where the scouring had taken place. The breaches on the island were comparable to what happened on the North Carolina Outer Banks, where the barrier islands, and NC Highway 12, were also scoured and cut through.
Nearby we came upon a half-buried barrel-shaped cylinder of resin, a product of the naval stores industry. (Billy and Sarah Dawsey had located it the previous day). 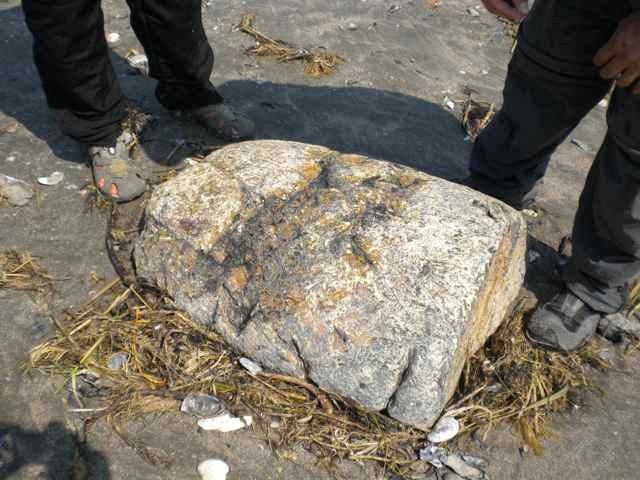 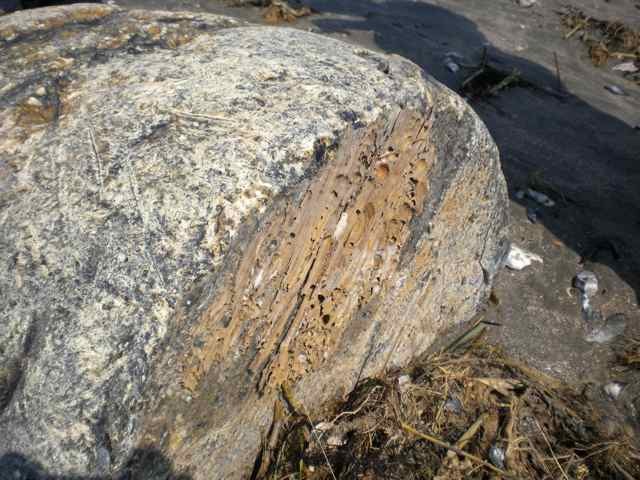 The wooden staves originally covering the barrel were gone except for a few remnants on the bottom. Talk was of recovering this artifact, and placing on display at the Sewee Center in the future.  We also found and recovered another rib from the Atlantic right whale found washed up on the island in the last year. 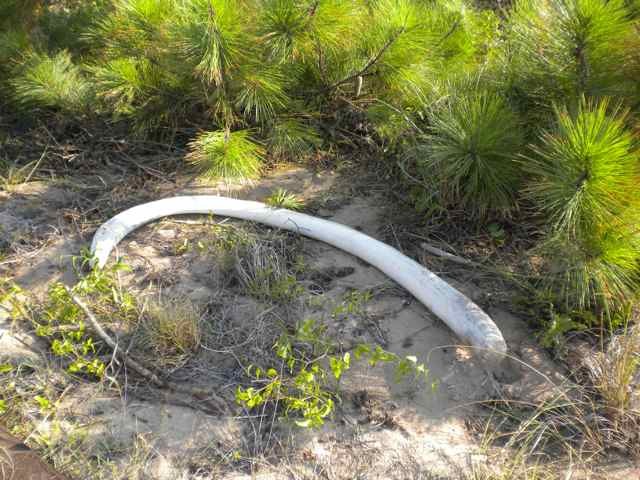 In the largest set of dunes near the south end of the island, many nests had been relocated this year. The destructive forces of Irene’s waves had covered some here, and had blown out a section of dunes. 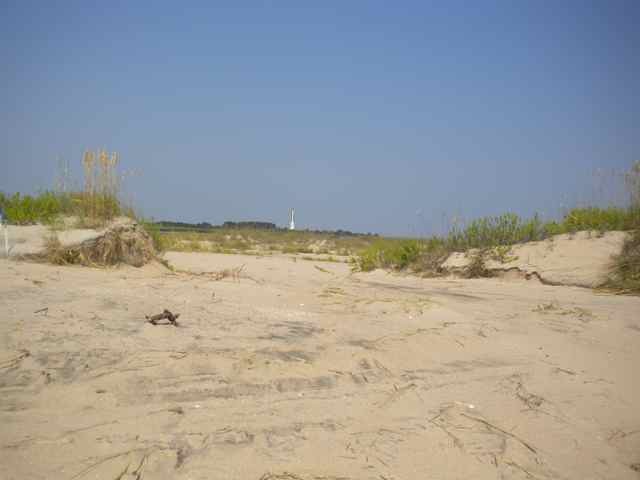 We walked through this opening, providing a view to the lighthouse, and found cages and poles scattered beyond toward the island’s backside. Billy recorded the nests still standing, and the numbers of found poles of lost nests. Even though we covered the whole island, and viewed the loss of many nests, I never saw one egg.
Cape Island took a significant blow from Hurricane Irene’s storm tide and waves. I reminded myself that this is a normal process. One function of hurricanes is to accelerate the movement of barrier islands toward the mainland. The movement is accomplished by flattening dunes, and pushing the sand toward the backside. We saw large sections of sand pushed back all over the island. 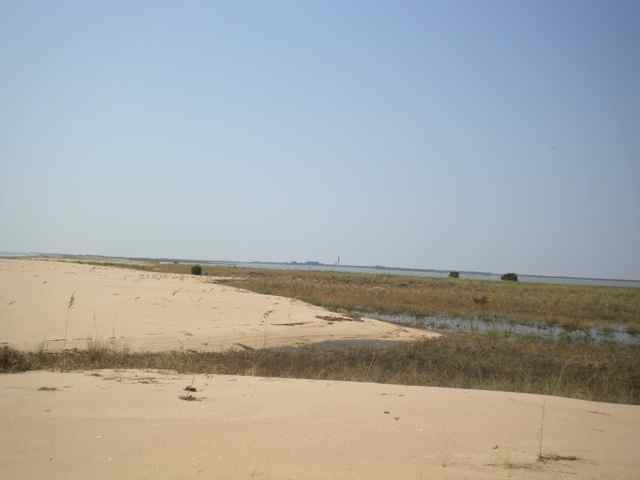 Loggerheads have been nesting on beaches impacted by hurricanes for millions of years, and weather events may be included in the list of hazards that each egg, hatchling, turtle, and the entire species must face in the struggle for survival. Tropical storms are nature at work, as are the life histories of these magnificent marine reptiles.
Some argue against humans get involved with this species’ survival, since these sea turtles have survived for millions of years. The rationale of human intervention is to balance the ill effects from man, including destruction of nesting habitat through coastal development, pollution, and hazards from commercial fishing. Locally, the replenishment of Cape Island’s sands have been curtailed with the damming of the Santee River and resultant reduction in sediment flow. To argue against the human efforts for loggerheads is to ignore, or to not understand, our species’ destructive endeavors.
And what of next year’s loggerhead season on Cape Island? There are very large losses of nesting habitat. Where will the loggerheads nest? From history, we know they will continue to return.  Refuge staff are dealing with the immediate efforts to save the current nests and capture the data that still exists. I’m sure we will emotionally approach next year with a mixed stew of anticipation.