I’ve been waiting for the right series of conditions to make the sail across Bulls Bay to Sandy Point and back. I wanted to take the outgoing tide out to the bay, and make it across to Sandy Point to see what was left at low water. People have predicted that this island would be gone this year, and several friends have assured me that it has happened. The change of tide would facilitate my return passage. The ideal wind would be southeast, allowing me to reach back and forth. A wind change to southwest would mean tacking back the seven miles across the bay, a trip that could be long and difficult with waves kicking up. The marine forecast had been predicting east or southeast for several days, and SE 5-10 knots was the prediction that Saturday morning. However the low tide was much earlier than desired – 9:30 AM, and to make it to Sandy Point would mean an early start and an early filling-in of the southeast wind.

I cast off Kingfisher before 7, and paddled across the Intracoastal Waterway in little to no wind. But once in the entrance to Andersonville Creek, the sail responded to the first puffs of the southeast wind, and we were sailing. The creek bends to the east and south in its course to Bulls Bay, and we tacked accordingly. While we beat out into the bay, a solo kayaker came up from astern, heading out to the Northeast Point of Bull Island. He was enjoying the smooth conditions, especially since he reported getting beat up on his last trip in higher winds and waves. As he made a straight shot for the island, I headed on the starboard tack on an easterly bearing toward waters outside of the shallows of the inner bay.

I looked to hold this tack and course until a little before reaching the line separating the bay from the ocean. I hit bottom a couple times, and finding a shoal had to jibe back to the port tack before returning to the easterly course. The sun was still low, and the brightness was not only reflecting off the water but a patch of sand in the distance, shining ever so brilliantly. This patch of sand was an accreting isle about a half-mile to the north of the Northeast Point. I tacked over to take a closer look, and saw many stranded horseshoe crabs, along with shorebirds and seabirds. I decided to wait and land on my way home.  It was getting close to low tide, and the sail across Bulls Bay lay ahead.

I had made this crossing perhaps three times in the past, and northeast seemed an appropriate bearing. The conditions presented were perfect for peaceful sailing, and surveying the waters. I knew I wanted to stay inside the shoals separating the bay from the ocean, and this would guide my course. I had seen a couple boats fishing near Bull Island, but would have this body of water as far as I could see all to myself until reaching Five Fathom Creek. The wind speed was in the middle of the 5-10 knot prediction, and very steady. I saw ahead of me some shoals marked by the breaking of small swells. These waves presented little problem for Kingfisher. Marsh Island resolved as an island off to leeward. Fixed markers appeared in the distance to the east, and I would be looking for posts that would lead me into Five Fathom Creek. I finally identified from the various markers in the distance the taller of the towers on Lighthouse Island.

We passed close to a large range marker covered with cormorants and brown pelicans. In approaching the western entrance to Five Fathom Creek an adult loggerhead appeared before diving. I was surprised I had not seen others along the way. But I had arrived at my destination, and the news was accurate – the island known as Sandy Point was no more. 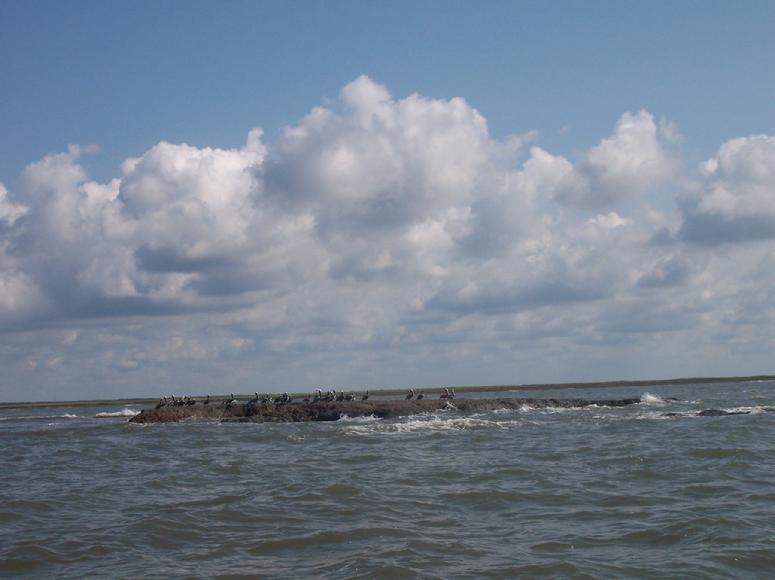 There was one remnant, not sand and shell but “rock” – marsh sediment still exposed above the waves coming in from the bay, and making an attractive roost for pelicans. In 2008, I had gone on a field trip here led by the geologist Miles Hayes, and the group of about 40 people walked around on the acres of sand, shells, and marsh sediments.

I beat to windward of the isle so I could drift to capture some photos. That task completed, I sailed across for a landing on Raccoon Key to eat lunch. My last visit to Raccoon Key was probably three years ago, and the signs of erosion were also visible here. The view across to the other side of the creek was quite startling. A long high pile of oyster shells stretched out like a wall, deposited here by the waves from the bay. 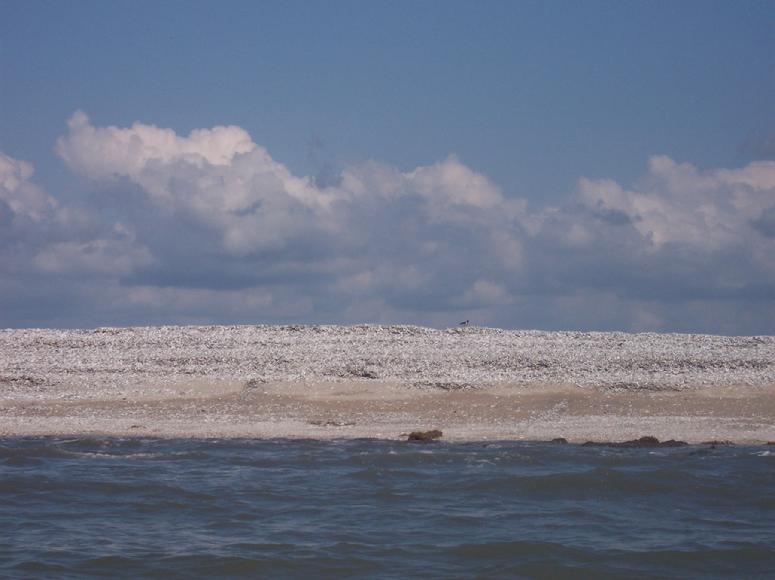 In a visit to this spot in 2007 there was some shell deposition up in the marsh, but this extensive mass is presumably material that had made up Sandy Point. The height of these shell banks recalled the massed shells of White Banks off to the northwest in the bay.

We continued along this marsh island, and back out into Bulls Bay. The skies continued to be clear, and besides one boat to the east I would not see another boat until reaching Bull Island. 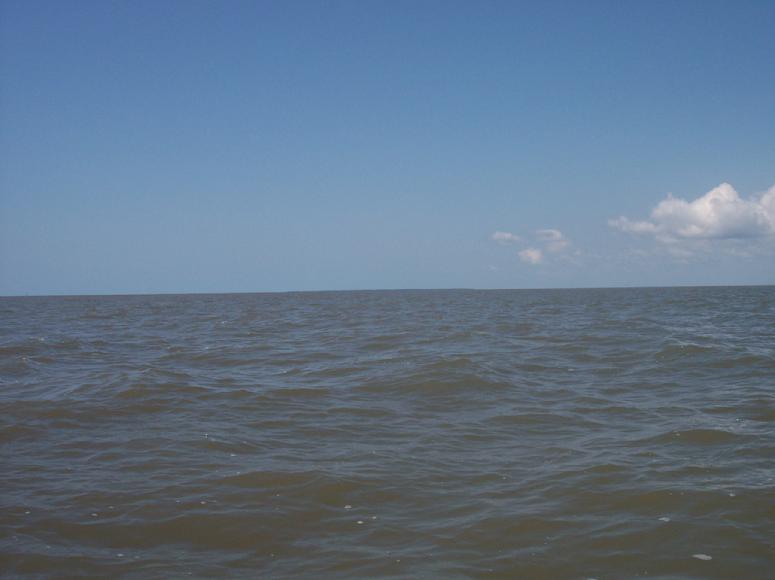 The last time I had made this southwest passage was in September 2007 when I crossed the bay in a brisk NE wind on my marathon sail to cover the Inland Passage. In my exuberance during the previous crossing I had set my course to what I thought was the Northeast Point of Bull Island, but instead what turned out to be the further eastern extension – the Boneyard. This time my bearing was on the upland’s edge on the west side of the island, which would keep me to the west of the shoals and sand isles in the bay. The sailing was very gentle, and only disturbed slightly by two sets of shoals appearing to extend all the way to Marsh Island. The course I sailed was quite accurate in returning to the sand isle close to Bull.

I took the opportunity to land and walk around this isle. As I had observed sailing by, there were many horseshoe crabs stranded. 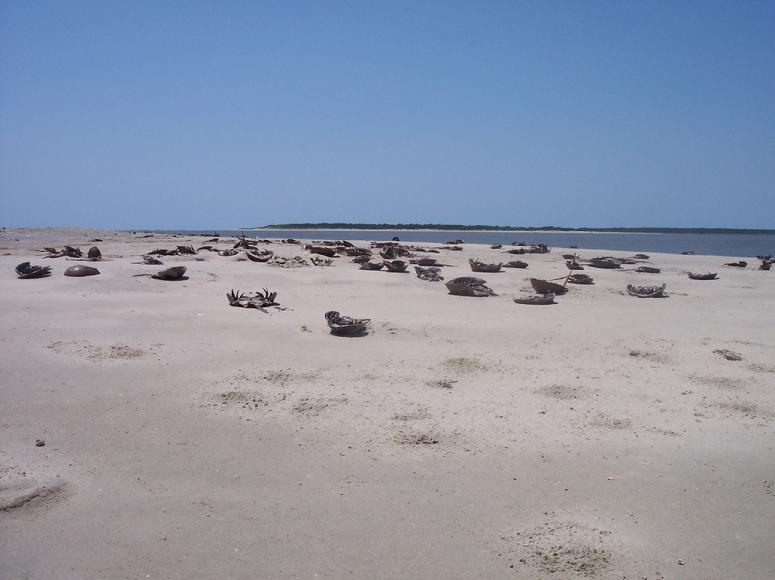 The flocks of semipalmated sandpipers gave an indication of what these ancient species of invertebrates had been doing – the birds were feeding along the shoreline, presumably on horseshoe crab eggs. 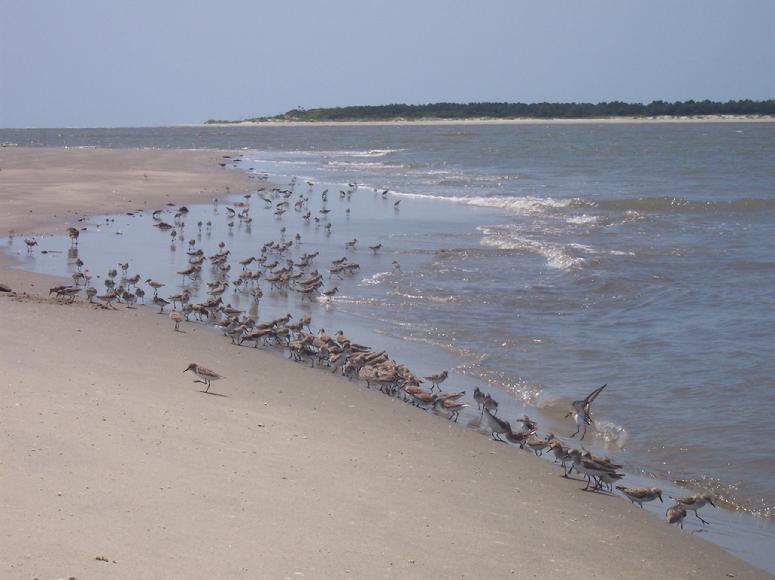 A week earlier I had seen the same strandings on the Northeast Point. As I did that day, I returned a good number of these upside-down creatures that were still alive to the water.

After pushing off we continued the southwest sail across the inlet and past the Northeast Point into Bull Creek, planning to continue on behind the island and cross back to the mainland via the ferry route. Dolphins were in the waters, and in the air I met up with a new crop of green-headed flies, hitchhiking along on my sail or dive-bombing me to taste my blood. I probably swatted ten that I left in my wake on the way home. We made the turn to the north, and saw ahead Island Cat coming around a bend in the creek toward us. They slowed down before our courses met, and their captain hailed me. We spoke briefly: he commented on how I had wind and tide with me, and I noted about the green-headed flies. These biting flies were the only item in the negative column on the remaining passage home.