Moving away from my home waters around Bull Island, I traveled into northern Georgetown County, not trailing Kingfisher behind me but sporting a canoe on top of my vehicle. I had been planning this trip – seemingly an inordinate amount of time for a half-day paddle –on one of the spectacular coastal rivers of South Carolina, on the day marking the autumnal equinox, September 22. It would be a reunion of sorts with old friend Rand Schenk from Portland, Oregon, whom I have shared a number of adventures in the past, including the paddling of blackwater rivers in the Carolinas. He was driving down from Chapel Hill, NC while I drove north for our meeting.

We planned to meet between Chapel Hill and Awendaw, and studying the possibilities led me to a section in Dillon County above the confluence with the Lumber River. Reaching out to my fellow Sewee Association board member Tom Badgett, an experienced Southeast canoeist, I learned that the upper section of the Little Pee Dee River would not be a good idea. With the water naturally low at this time of year, and the river even being lower due to the lack of rain, we would encounter multiple trees down across the river, and snakes hanging in the branches. In checking in with another expert source, Craig Sasser, the refuge manager of Waccamaw National Wildlife Refuge, he suggested an alternative reason to not attempt the upper section. With the water so low, and that section of the river swamp without a channel, the chances of getting lost would be high. Tom’s suggested half-day trip from Punchpole Landing (also known as Punch Bowl) downriver to the landing at the Highway 701 bridge (Yauhannah Bridge) seemed spot-on.

I made a stop at the Waccamaw headquarters, located close to the 701 landing, and was surprised to see a group of children out front for an educational program. It was not just any class, but Sewee Earth Stewards program, the flagship environmental educational program of the Sewee Association. In the middle of this group was Julie Binz, the talented and dynamic educator for the Sewee Association. Supported by two volunteers, Julie was facilitating one group taking water samples from the Great Pee Dee River, and the other off on a trail to learn about local ecosystems. This fairly new wildlife refuge, formed in 1997, has identified its own flagship species, the swallow-tailed kite, that nests in the spring and summer in these river swamps. As I learned, these endangered birds had already left in their migration south to South America.

There were only a couple of cars and trucks parked at the landing when I arrived. On the floating dock leaves slowly floated by moving upstream, indicating the tidal nature at this point in the river. One impact of global warming is the movement of the tides further upstream with saltwater, killing cypress trees and bringing saltwater species liked blue crabs further inland. I noted a distinctive large cypress tree upstream where several years ago I had watched a quintet of swallow-tailed kites circling close above its classic cypress top.

After his arrival, Rand left his vehicle and rode with me up 701 and then the Pee Dee Highway until our turnoff on the dirt but well maintained Punch Bowl Road. The landing was empty, with some remains of bonfires and parties. We were pleasantly surprised by the quality of the ramps, and the existence of a floating dock. We would not need to sully our borrowed canoe by launching in the mud. She was a sweet canoe (thanks Chris!), the widest that Rand had ever paddled: lightweight, a thin fiberglass skin over a thicker spine and ribs, and capped with aluminum gunwales.  A car drove through the landing with a young couple checking out the scene, an experience repeated a number of times by others when we returned in the afternoon. This landing is not just a boat access to the river, but a window on to a vast and incredible world, and the act of coming to witness the place reminded me of my frequent visits to my community landing along the Intracoastal Waterway.

Prior to our final loading and casting off at noon, an outboarder pulled down to the landing, and looked with an experienced eye at the river. He quickly assessed that there was not enough water for his boat. We chatted briefly, and he wondered if there might be some shallow spots downstream where even our canoe would not float. I picked his brain about the location of a historic site, Tanyard Landing; finding his shortcut to this place on the Great Pee Dee River would have been a long shot. The low water was a good sign for us in our quest to have a quiet river without a lot of outboard traffic. In fact, we would not see another person, nevertheless an outboard, for another two hours.

The river surpassed my expectations. Punchpole Landing (named probably for the pre-steam boat and raft traffic using poles to push along the river) was clearly a fluvial sand ridge, extending even higher on the bend up the river. Paddling downriver, we were soon in river swamp without high ground, even in the low water. I anticipated land abutting the water with dwellings of various forms, as seen in a past trip along the Edisto River. But there was no high ground, and the quietness abounded.

I have traveled the Pee Dee Highway, the road that parallels this river swamp, for years in my trips to and from North Carolina, but floating down the Little Pee Dee was a revelation.

I was both in my element, and out. The river was relatively easy to follow. I knew other swamps, like Pawley Swamp coming in from the east, would merge, but many other branches, oxbow lakes, and waterways continued to appear, providing what seemed like infinite possibilities for exploration. This new world provoked both awe and questions. Rand and I pondered these wonders in the moment as we also caught up with our respective lives. 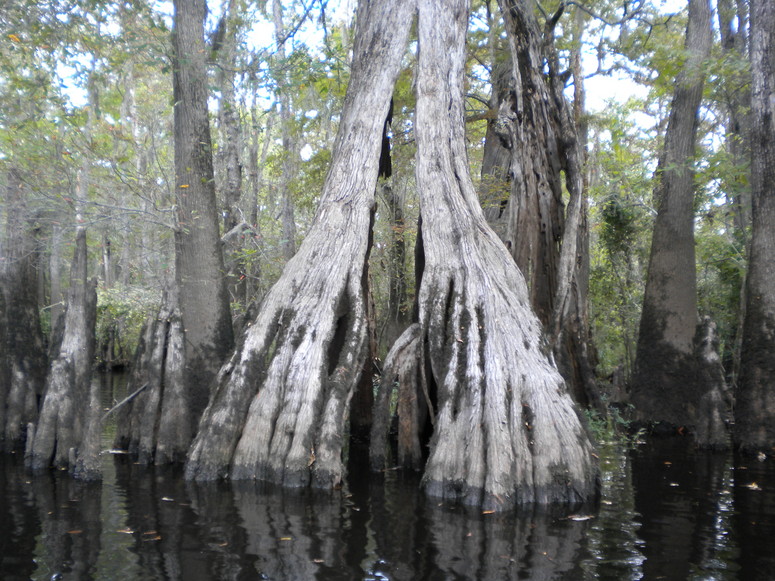 Reptiles were not prominent, except for the plops of a few turtles dropping off logs. Birds were plentiful all along the river, observed through the flight and calls of pileated woodpeckers, red-tailed hawks, great blue herons, great egrets, anhingas, and kingfishers. All along the river, cypress trees were a predominant species, and both their canopies and knees shaped the riverscape. Individual trees stood out through their distinctive shapes, whether hollow, see-through, or shaped by some grand sculptor. 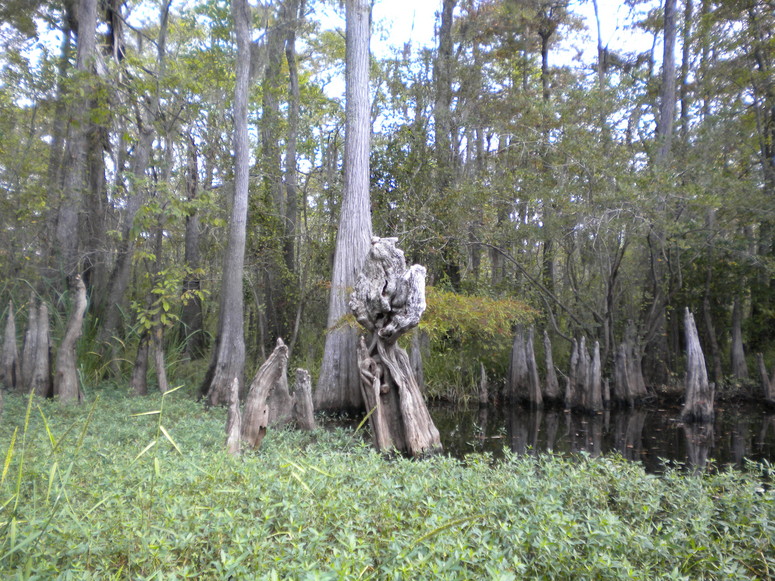 Sections of green aquatic plants particularly favored by waterfowl, swamp smartweed, intruded to the river in places, providing a green carpet with small yellow flowers. Wonders abounded along this scenic river as we leisurely paddled along.

As the river continued to widen, we spotted our first outboard ahead, quietly fishing along the bank. We learned that they were also having a wonderful day, but without the benefit of catching any fish. They gave us the distance to a main landmark – one half-mile to the confluence with the Great Pee Dee River. Prior to the confluence, we came to a section of river populated with river shacks. (For a look at the history and legislation concerning these floating retreats, view this New York Times article.) We dug in a little deeper to pass by and return to the uninhabited riverscape, now also refreshed by a southeast breeze. After the confluence, the boundary of Waccamaw National Wildlife Refuge appeared via postings on trees. The outboarders we previously passed now came past us, slowing respectively to a no-wake speed, and heading back to the 701 landing. Another fisherman passed, the only other boater we saw out on the water this Wednesday.

After the confluence, the joined Pee Dee was a considerably wider coastal river, though still with little flow. 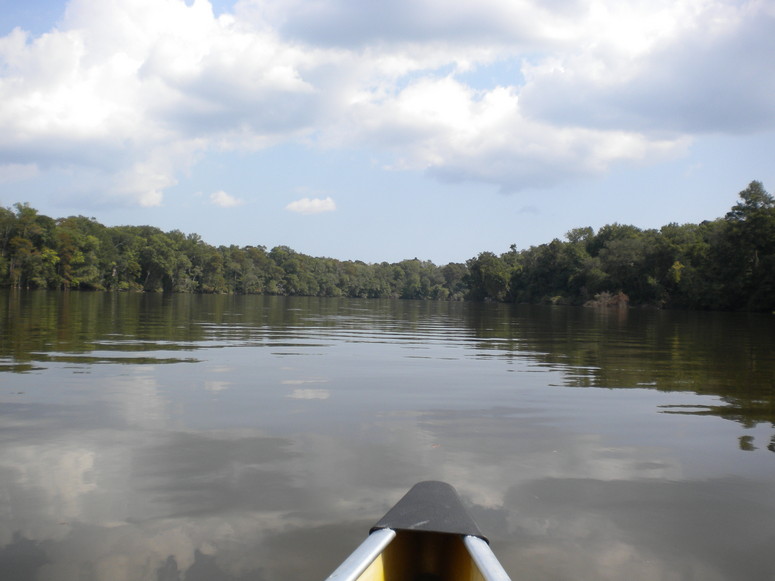 The refuge boundary now appeared on both banks as we paddled more assertively, and Rand, a strong stern paddler, skillfully kept us on course. Around a bend, the 701 bridge appeared ahead, and in closing with it a couple on the floating dock sat back on lawn chairs and fished. 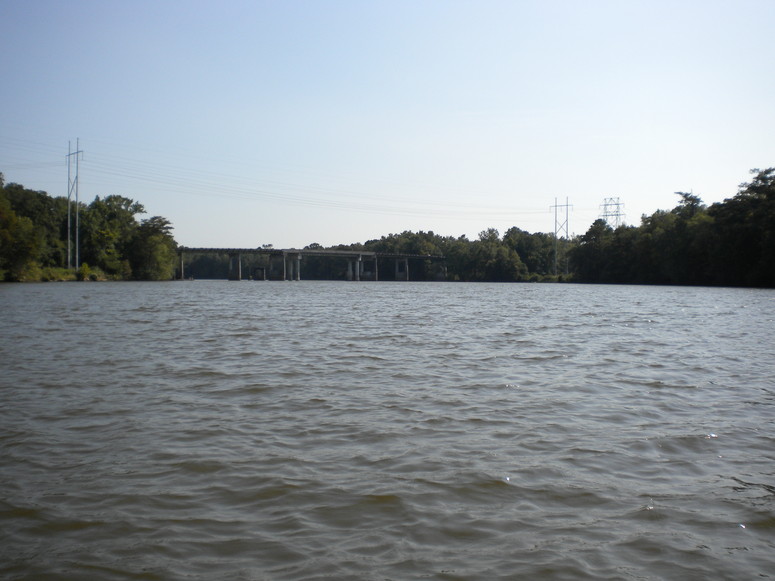 We continued under the bridge, heading for one little side trip. A split in the river – the Pee Dee heading to the west and Bull Creek to the east that downstream rejoin – forms between the waterways an island: Bull Island. We coasted in along the Pee Dee side, feeling a stronger current pulling us along. With the water low, the bank required a little climb, and after a few looks I settled on a spot to scramble up.

Rand felt no inclination to step ashore, and sweeping some spiderwebs out of my path with a stick I ventured on this forested isle – bottomland hardwood forest. With shorts and sandals exposing much skin, I looked around in the relative darkness of the forest compared to the brightness of the river, stepping carefully on the lookout for cottonmouths and the plentiful poison ivy. 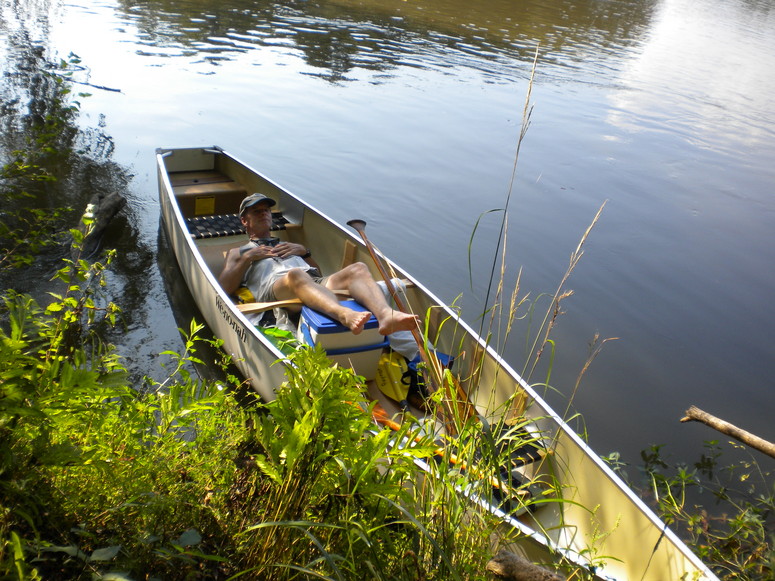 Piles of driftwood marked higher water, and according to Craig Sasser this island becomes inundated in times of flood. My brief excursion just scratched the surface of this part of the refuge.

We paddled back to the landing at the bridge, which was now empty excluding Rand’s car. Upon the return to Punch Bowl Landing to switch the canoe to my car, we found several people enjoying the river: sitting in their cars with doors open, swimming in the river, or wading along while fishing. The river here on this day could be waded from bank to bank. Traffic from vehicles – trucks with boats, cars, and four wheelers – continued to arrive. A friendly man along with several children wading in the water told us stories of the great bass fishing nearby.

After dinner in Conway, we headed our separate ways. In the section of highway between Conway and the Great Pee Dee River, the sunset began lighting up the sky with a true sailor’s delight.  The sky continued to evolve, and the appearance of a full moon in the east gradually added light with the sun’s withdrawal. At the top of the Sampit Bridge at Georgetown, a glance to the east showed Winyah Bay bathed with this moonlight as Jupiter followed. This bay is the union of rivers, with waters coming from as far away as the North Carolina mountains. As a fantasy that all paddlers that float on rivers entertain, I imagined traveling the Little Pee Dee to Winyah Bay and the ocean. In the short term, I knew that Kingfisher would soon be cruising across this bay.