I occasionally yearn to be in Great Smoky Mountains National Park (GSMNP). Ever since camping trips with my family back in the early 1990’s, this national park has felt like home. Two college buddies and I hit the weather perfectly with a long planned trip last weekend: crystal clear skies, cool temperatures with no humidity, and fine challenging trails to walk.  We crammed as much hiking in the long weekend as we could. We indulged ourselves in that very human instinct (for many of us) to climb the highest peaks in sight. 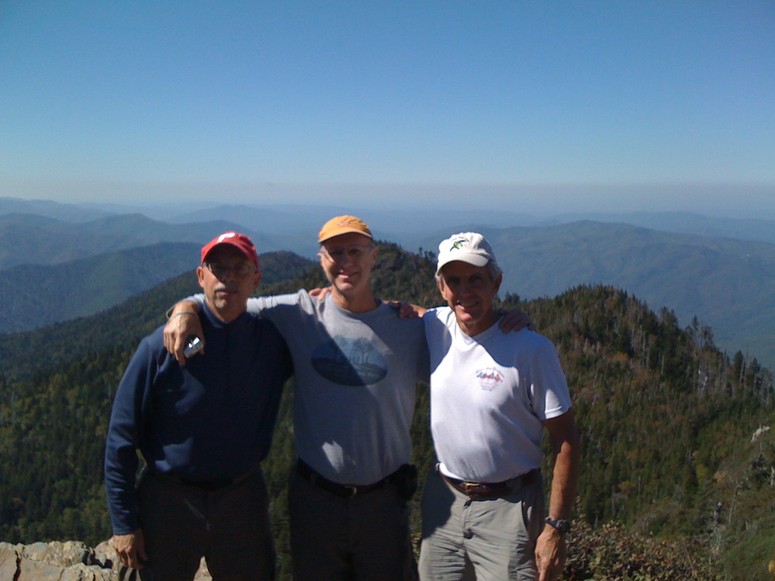 The two destination peaks were Mount Cammerer, and Mount LeConte. Along the way we met a number of fellow hikers, particularly on Saturday when we hiked up and over Mount Leconte, starting up Alum Cave Trail and coming down Rainbow Falls Trail. Two of the most interesting people we met were both from Cocke County, Tennessee, the location of our campsite at Cosby Campground in GSMNP. We spent some time on Mount Cammerer at the beautiful restored fire tower on the peak (see a photo of the fire tower on this page with info about Cocke County).  The tower is a structure of cut stone and hewed timbers from the surrounding lands. CCC “boys” built the tower, at the same time as the boys were also building the Jacks Creek impoundment on Bull Island. While walking around the narrow porch allowing for 360-degree views of the area, we met a young man who had hiked up on his own, leaving a less-fit friend below on the trail. He was a native of the small town of Cosby. He mentioned that his “Pappy”, his grandfather, had been a fire ranger on lookout at this tower years ago. This grandson made the walk up here so he could share this experience with “Pappy”, whose church planned to conduct a prayer service for him.

“Pappy” had also worked on the plumbing of the cabins as part of the lodge of Mount LeConte. We met a number of people hiking down the Alum Cave Trail as we ascended; many of these descending hikers had stayed the previous night at the lodge at Mount LeConte. I asked an older hiker as he came down if he had spent the night there. He informed me that he had walked up in the morning, starting at 7:15 AM, and was on his way down around 11. This was a regular walk for him – a routine where he delivers the local papers to the lodge. Asked how often he did this, he replied “Seventy-six times so far this year”. This Paperman was a character, certainly without an athlete’s physique, but this Alum Cave Trail was no walk in the park.  Challenges abounded, with steps cut in the stone or logs in places, and other sections where a relatively narrow path over stone had cable secured into the higher rocky mountainside for a safety grip. When asked if he ever stayed overnight, the Paperman said he could, but that everything else was available to him.

This national park has the same designation as the combined coast of Capers Island, Cape Romain National Wildlife Refuge, Santee Coastal Reserve, Yawkey Wildlife Sanctuary, and Hobcaw Barony: UNESCO Biosphere Reserve. Though as different from each other as the mountains and coast, these are places not just treasured nationally, but internationally. Leaving Cosby on Sunday morning, and feeling the pang of regret at leaving such a wonderful place, I also looked forward to heading out to Bull Island on the following Sunday.