After a long run of work, home responsibilities, and general busyness in my life, a Bull Island window opened wide: winds forecast for north at 15 knots changing later to northwest at  5-10 knots, low tide at 1:02 PM, and clear skies. It was a Monday, and the day prior to the winter solstice. The weather was wintry, since it was thirty degrees when I left home for the landing towing Kingfisher. Layers of warm but light clothing prepared me for the frosty elements. 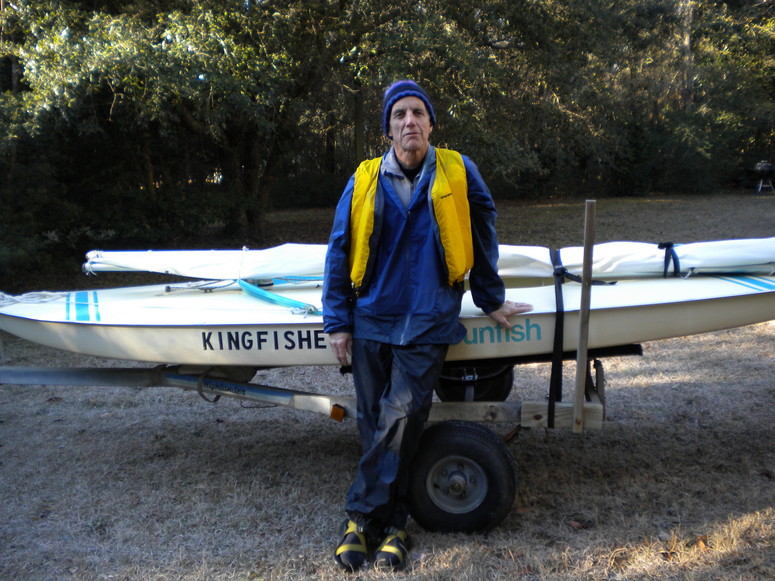 I recall a memorable trip on the winter solstice to Bull Island on December 22, 2003 which I chronicled in a chapter in Exploring Bull Island. On that day the waterway was glassy as I set out for the island, while the 2010 morning had a solid wind. On both mornings it was thirty degrees when I left home. In 2003 I was able to realize my dream of making a complete walking circuit of the island: I planned only a segment of that long walk on this day.
I was sailing right away after casting off, quite different from my last two sails when I paddled much of the way to the island. With the wind behind, my body layered up, and aglow in the sun, I was deceptively warm, and a false move or inattentiveness would rapidly change this state with a dunking in the cold waters. I was not surprised to see any other boats in the Intracoastal Waterway or Andersonville Creek. Since my last trip a month ago migratory waterfowl had populated the waters. At the Shark Hole, the confluence of strong currents created large gyres of swirling water, pulling on Kingfisher in the sail out toward the island.
Though I wished to stay dry, a course across the bay appeared the fastest with the north wind, and it seemed that there would be enough water to allow me to cross the shoal on the southwestern end of the bay. I was pleased that the swell in the bay was quite small, and the run across appeared relatively dry. Viewed to the north, the bay was wide open, and the clear atmospheric conditions allowed an outstanding panorama. I was encouraged with having enough water halfway across the bay by a fin appearing between Kingfisher and the marsh, and this dolphin followed along for a minute. A patch of increased swell jumped up, and after navigating through I located its source: a creek exiting the marsh, and pushing its outgoing waters directly into the north wind. Prior to reaching the turn into Bull Creek, a boat appeared about a quarter mile ahead – a classic crabber with low freeboard, motoring south into Bull Creek. Past the point of marsh, I jibed and began the run southwest toward Summerhouse Creek and the public dock.
We hugged the marsh to stay out of the outgoing tide opposed to our progress. Cormorants beat along, and hooded mergansers swam along the surface. We used the shallow waters next to the large marsh island in the middle of Bull Creek to avoid the flow. The run down was smooth, as was the landing at the dock. As I anticipated there were no other boats at the public and government docks. A kingfisher welcomed me to the island with a call as it flew across the creek. I secured Kingfisher to the inner side of the dock, and in changing footwear added a pair of wool socks to my cold feet and began a walk around the island.
There were no footprints on the road, and I wondered if there had been visitors to the island on Saturday. Checking with Chris Crolley later, it appeared that the Saturday morning rain had chased off any possible ferry passengers. I had imagined that there would be no other people on the island on this day, and that would be the case. I made the short walk to the picnic area, cut across under the live oaks by the Dominick House, and made the turn on to Summerhouse Road. (To follow walk see map). On this wintry day, the road contained the shades of my favorite color, green: live oaks, dwarf palmetto, yaupon holly, bay, and magnolia. The only prints were non-human, appearing sharply in the sandy road, excluding the vehicle tracks. But once past the Summerhouse Dike, fresh vehicle tracks also disappeared, and the the deer, raccoon, and fox tail squirrel tracks stood out prominently.
Summerhouse Road runs along the top of a sandy ridge and creates the western boundary for the Summerhouse Ponds. Live oaks frame the forest canopy, and create a filtering of light. 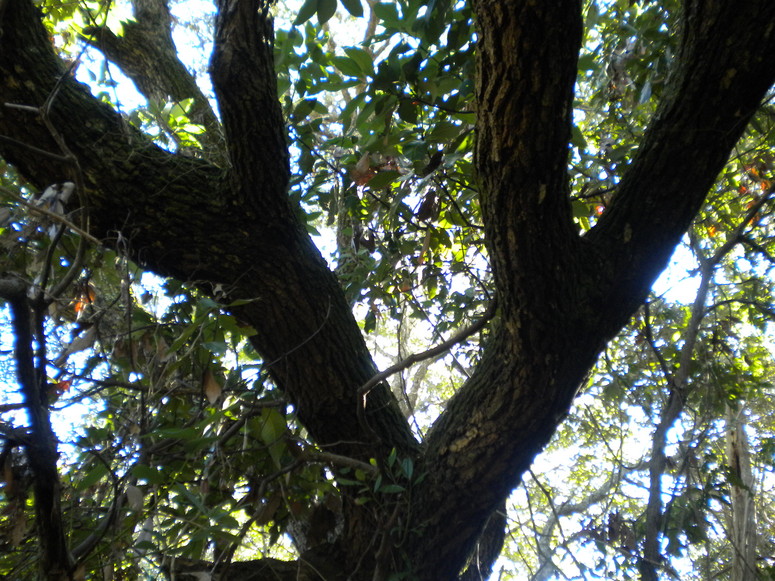 Along farther, a glance to the left through forest revealed the blue of the upper Summerhouse impoundment, and to the right the marsh stretching out to the mainland to the west. 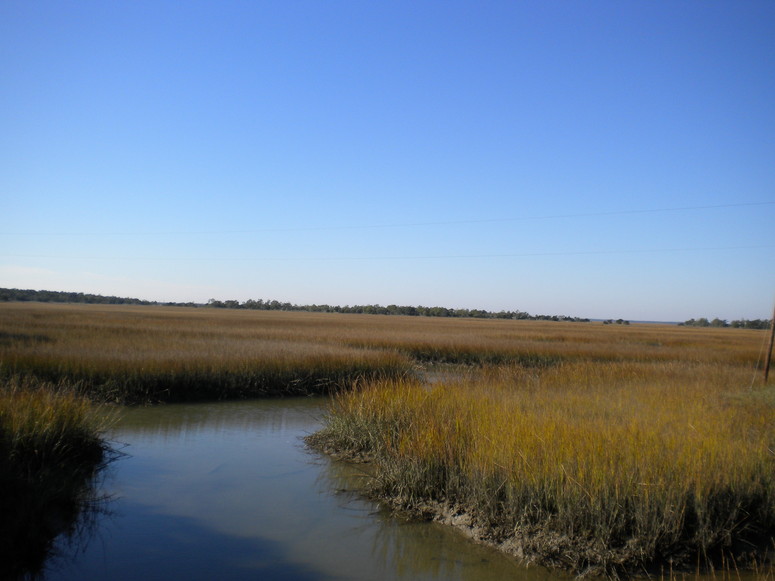 At the water control structure, the view was open to view the hammocks (Pine Island hammocks), and the impoundment with a variety of waterfowl, along with wading birds including a great blue heron, and snowy and great egrets. 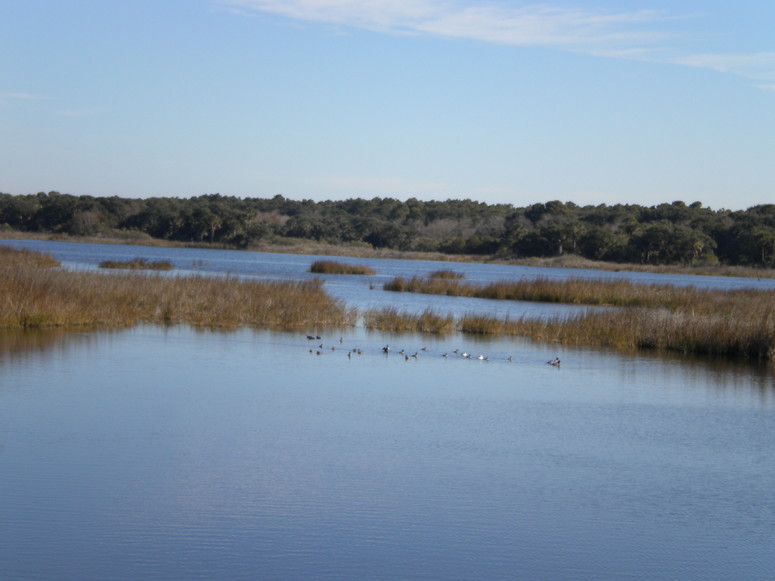 I continued the walk, turning to the south on Mills Road. I was amused by the partially obscured sign “Dead End Road”: the road continues all the way to the south and ends there, but in about a mile provides an access to the beach, my destination. A sign marked the turn to the beach, and I left the maritime forest to enter the transition zone of dunefield dominated by wax myrtles mixed with wetland in the swales. Looking back from the top of the dunes this shrub ecosystem presented an intermediate world between maritime forest and dunes. No footprints showed the way to the beach, though two tall posts were planted here to mark the entrance to this path from the beach. 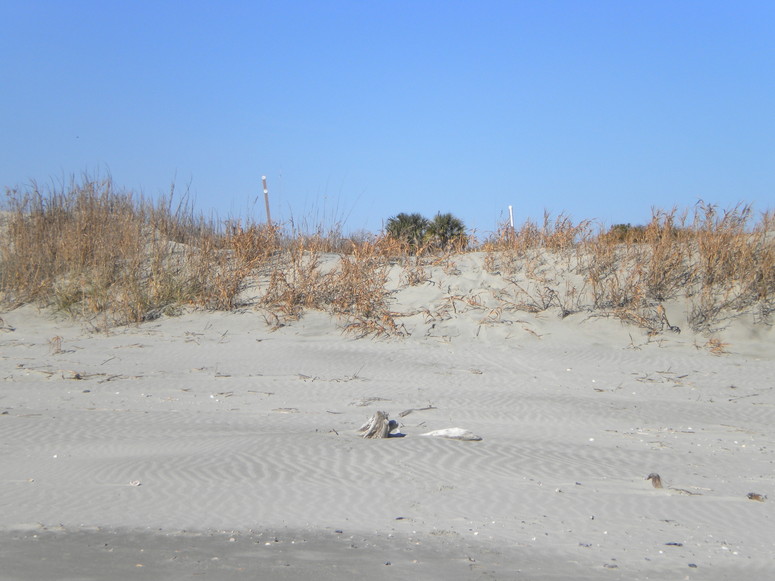 Low tide would occur within the hour, and the beach was smooth and etched with lighter sand patterns, reflected in the ocean and little swell smoothed by the offshore breeze.

As usual, the array along the high tide line attracted me, and contained a littering of shells and other portions of dead marine animals. Whelks were prominent, and quite a few contained the soft body of the animal inside the shell. Besides feathers, two dead cormorants were part of this line, and bright color was added with yellow sea whips. The assemblage along this two mile stretch included a variety of crabs, and juvenile horseshoe crabs.
My eye searched for fine specimens, and a lettered olive outshone others nearby. But most beautiful was a large Atlantic moon snail Polinices duplicates, with a range of color not previously seen by this beachcomber. Initially I mistakenly confused the shell as being rust-stained. 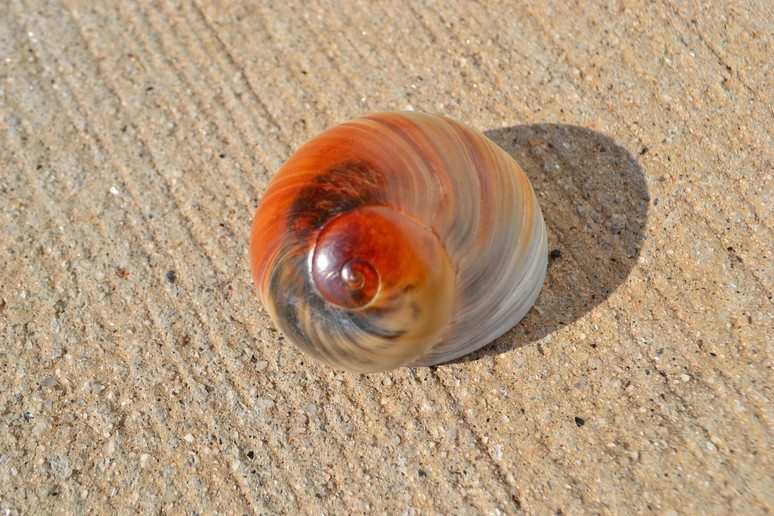 (Note: photo taken at noon on Dec. 22 with concrete background and throwing a long shadow of winter sun). Upon further inspection, the color burst from the tight center of the spiral, with streaks of red and black following the shell’s grain outward and suggesting colors from a Jupiter image. This observation was a preview: a connection to a celestial body was clear the following morning at 3:30AM during the total lunar eclipse when the moon also was etched with rare colors.
I arrived at the entrance to Beach Road after a forty-five minute beach walk, and left the shore to head back across the island. Where I had seen a great egret one month ago on the dike crossing the impoundments, a great blue heron took its place, flying ahead of me in stages, and finally circling back to where it started, ditching the one human intruder on the island.
All was quiet at the dock, and Kingfisher floated in her placid berth. 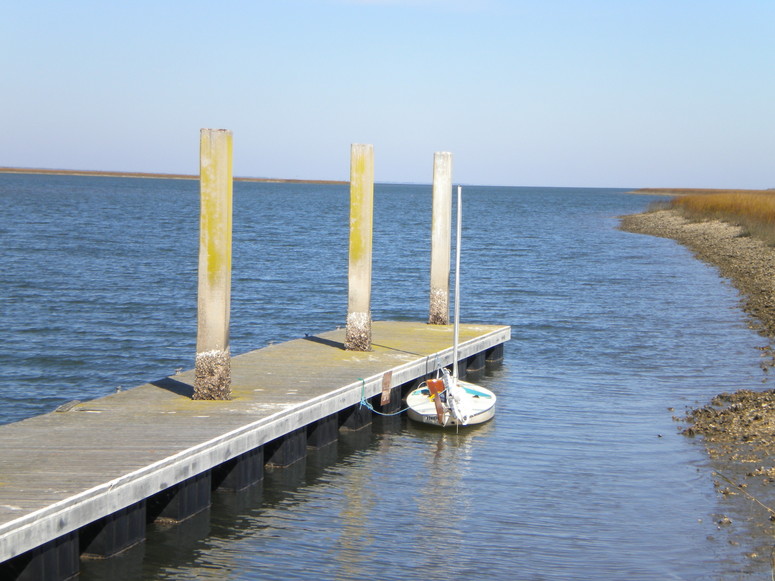 The breeze was still solid, and after stowing gear and raising sail I was off, this time taking the ferry route to Andersonville Creek. I expected a longer return sail, since I faced windward work whether from a north or northwest wind. I found bottom before getting into Bull Creek, and would hit many more times before my trip would be complete. The incoming tide would be an asset on the trip home. We tacked through this extension of Bull Creek, which continued to split off creating a network of creeks through the marsh and feeding Sewee Bay.  I passed a number of points of the marsh bank, all providing vantage points for various birds – great blue heron, great egret, vultures – to stand. A group of mergansers swam ahead, appearing with their white hoods as sails matching Kingfisher’s.
The creek continued to wind and narrow, and my tacks became shorter and shorter. The water was very clear, and I could see sea whips on the bottom from one side of the creek to the other. The last section was narrow, and I waited too late for one tack, crunching into the oyster reef lining the creek edge. I repeated tacks until making it to the straight section joining the Andersonville creek extension. The tacks continued to be frequent, and my knit hat often was knocked off by the sheet as the boom came over. The wind continued to veer back and forth between north and northwest. In the Andersonville Creek, one wind gust was paired with a wind shift that backed my sail and threatened a capsize to windward. The second and final boat to be seen came roaring past me, heading out toward the bay. The tacking continued until making the Intracoastal Waterway, where the outboard came back from its brief venture out into the creek. Dropping sail, I stopped before the dock with daggerboard in soft mud.
While preparing Kingfisher for hauling out, I heard the familiar rattle of a resident kingfisher, and saw him fly off. He circled back, and landed on channel marker #68 just off the pier head. Again he appeared on another flyby, and at one point hovered over the water, but showed no signs of fishing. While I continued my efforts to haul Kingfisher, the kingfisher came back into my vision and landed on one of the pilings. While this bird vocalized I listened, trying to understand, but the message for that moment was inscrutable.