A rare fog, gracing New Year’s day, blanketed the marsh and creeks on on my arrival at the landing. 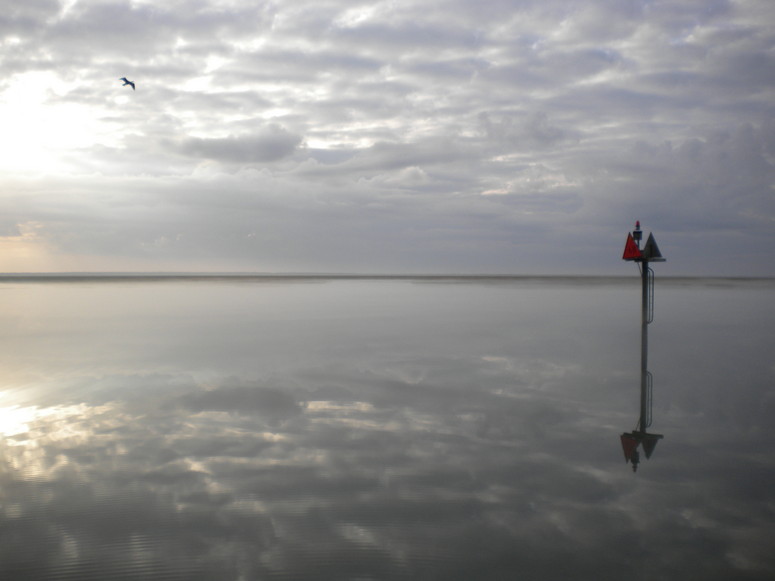 The predicted south breeze was not present, but by the time I had launched Kingfisher  and prepared to cast off, a breeze had sprung up and the fog had dissipated. We were sailing to windward, and the outgoing tide pulled us along. A familiar crabber with homebuilt canopy from McClellanville was working in behind the shell rake, and I saw him again in the first long reach of Andersonville Creek as he came out of a small creek – the first outboard I have observed making this passage. He turned for the Intracoastal Waterway, and the rising wind brought Kingfisher to life. At the Shark Hole, the crabber seen Dec. 20 motored through and turned in to the southwest fork of Andersonville Creek. I could see that I had made the final point of marsh to the north, and the view to the bay confirmed there was no need for further tacks on my course to the Northeast Point of Bull Island.
The bay was mostly smooth for the crossing. There was some sun early on, but the morning had turned gray. Our course took us by a line of red and white crab pot buoys stretching out toward the point; bay ducks dove or skittered off. It was an easy landing, and I found an old stump to tether Kingfisher to up the beach. The atmosphere changed as if a curtain had been drawn with the parting of the clouds and the appearance of the sun and blue sky.
As I set off to walk around the point, I was struck by a sight in the opposite direction, what looked like white buoys along the island’s backside along Bull Creek. But they were numerous, and I wondered about their placement and function until I noticed their drift. They were not buoys, and I speculated they could be white pelicans. My only sightings of these magnificent birds, Pelecanus erythrorhynchos, were in Jacks Creek in 2006, and on a sand isle off Murphy Island in 2008. I walked southwest away from the Northeast Point, hoping to get close for a good look and photo. I yearned for binoculars, and a camera with a telephoto lens, but without either I walked as far as possible to observe this group of about a dozen birds. Before I turned to retrace my steps for the walk to Jacks Creek (a shortcut here would be slogging and wading through salt marsh), I noted that there were several more groupings of these pelicans farther up Bull Creek.
A group of brown pelicans were gathered along the shore and flew off as I headed toward the point. I had this end of the island to myself, but I knew I might see passengers from the Bull Island ferry along Alligator Alley or at the Boneyard. With the sun out, I anticipated there to be a good showing from the ectothermic alligators, looking to soak up the sun in the warmth of the day. I followed raccoon prints through the dunes into the maritime forest and the entrance to Lighthouse Road, and at the T-junction took the right turn for the Old Fort Road.
I was soon on the Jacks Creek dike, and saw the reddish back of a raccoon across a section of water on an interior island in the impoundment. The view to the northwest looked out on Bull Creek and the mainland in the distance, and two dozen white pelicans appeared on shore, still too far for a close look. I zoomed my small Coolpix, including the digital zoom, to capture an image of these larger cousins to our familiar brown pelicans. 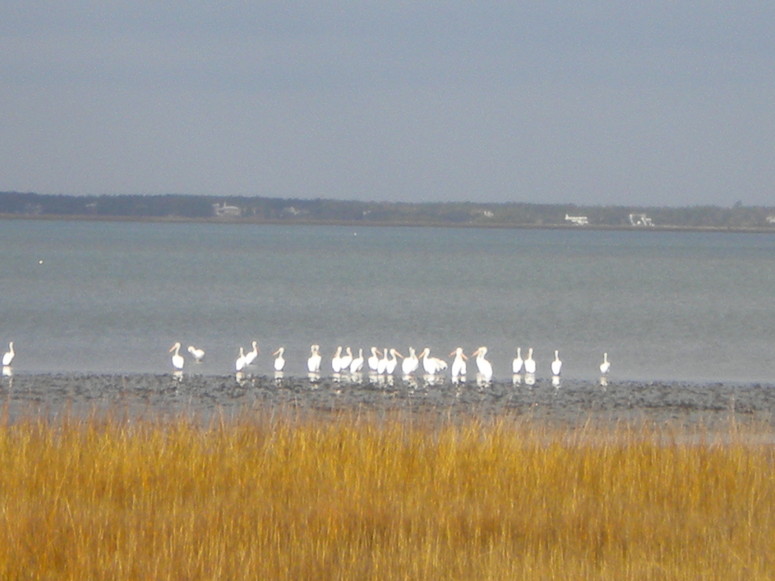 White pelicans have a wingspan up to 110 inches compared to the brown’s 90 inches.
I was soon back in the forest, and noticed how gorgeous the road was on this day. The Old Fort remains appeared in short order, and immediately past was the water control structure. The narrow inlet reaching into Jacks Creek has often been a place to observe multiple alligators. Instead, the raucous squawks of about a dozen great blue herons sounded as they beat a quick retreat. This gathering was a surprise, but I found clues to their attraction to this place along the edge of the canal – the cleaned-out shells of blue crabs. 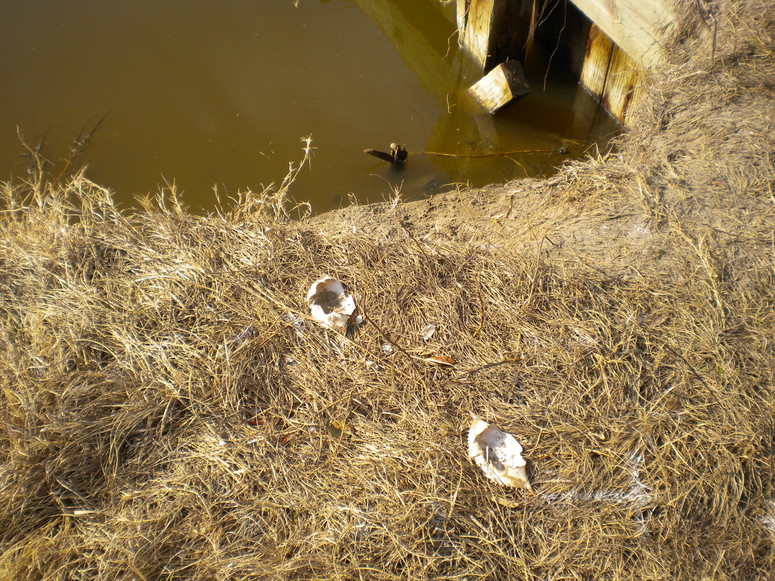 This location has quite a reputation as one for sizable blue crabs, and it appeared that the great blue herons had been feasting here.
I was not long on the forest road until the left turn onto Alligator Alley, which opens out quite wide for the first section. After several curves, I passed Pool #1. After the junction with Sheepshead Ridge Road, I anticipated seeing alligators on the dike, but my first glance picked out a grouping of birds halfway down the walkway, dominated by four wood storks, and including a brown pelican, great egret, and snowy egrets. 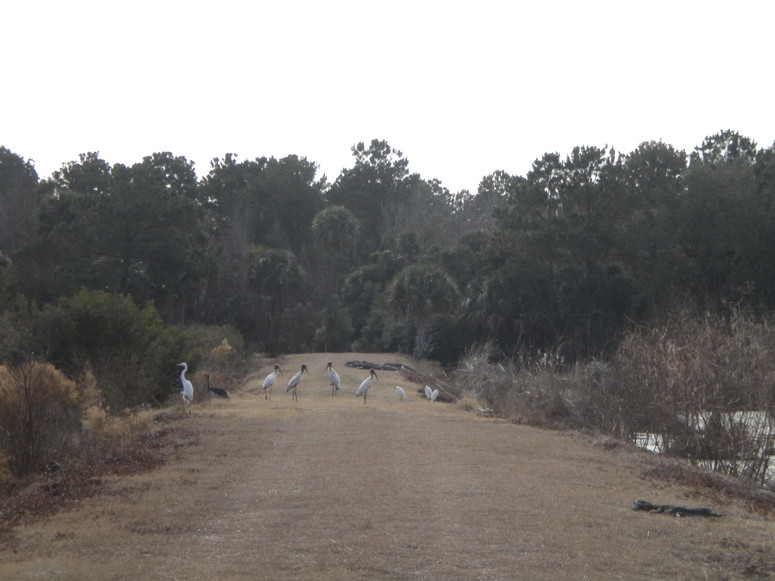 I walked slowly to get closer, and could see alligators on the flats to the right, as well as on the bank. Past the birds a large gray area appeared to be a large gathering of these reptiles up on the dike. Most of the alligators on the dike plunged into the water, but a small one (thirty inches) never moved when I walked by. This reptile population clogged this little pond, appearing on the bank, in the water, and on flats, in places lying on top of each other. 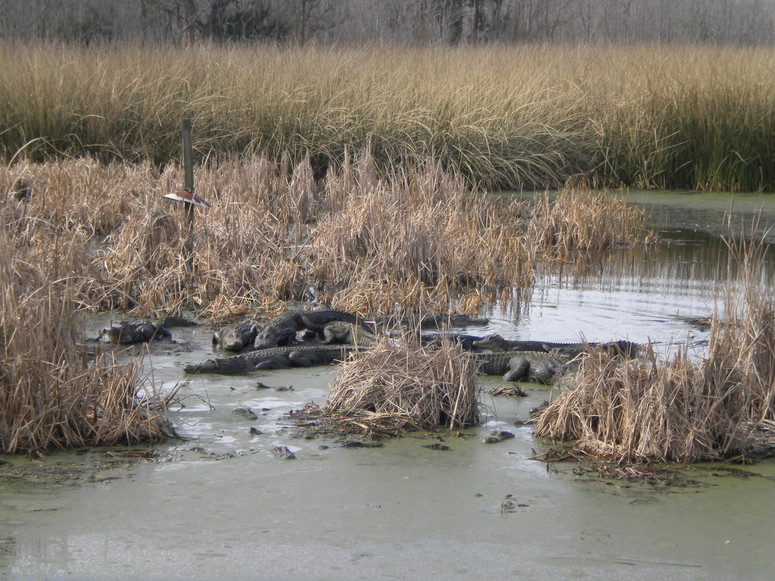 A family of four people appeared behind me, having come off the ferry in the previous hour, and they experienced the sight of their very first alligators. They were variously thrilled, frightened, and upset with other family members for getting in too close for photos with gators on the bank. We chatted for a minute, and I shared that I could not recall seeing as many alligators at this place in the past.
Pool #3 had less water and only a few alligators, though one of size. Turning left on Lighthouse Road, I continued toward the Boneyard, making a stop at the berm near a finger of Jacks Creek, and alert for a sighting of Alligatorzilla. But alas, this alpha alligator of the island had not been seen for a while, and was not to be seen on this day. On the road toward the Boneyard, and passing over a section of wetland joining Jacks Creek with Moccasin Pond, a medium sized gator lay right next to the track. The path out to the Boneyard from this road always is a wonderful transition from one world to another, but a surprise awaited me. I left the maritime forest and stepped down into a world of sea fog, making the Boneyard that much more mysterious and magical. 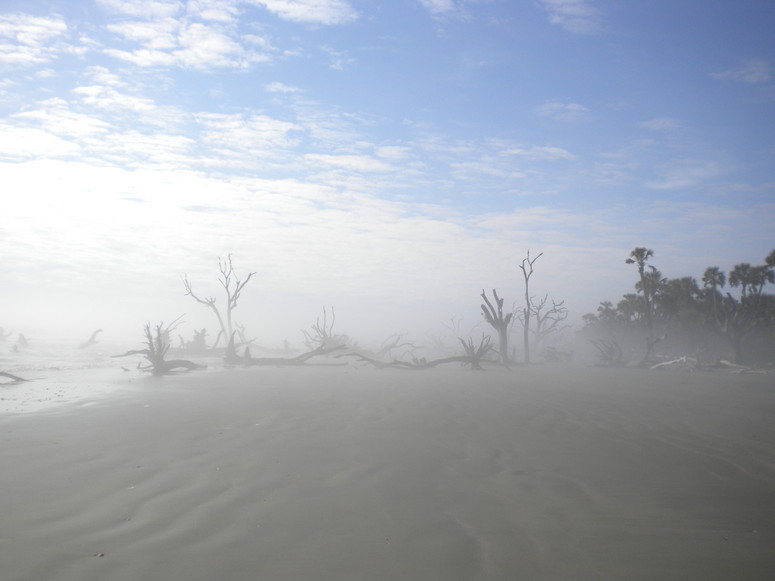 The wind had dissipated, and visibility was considerable reduced. I was struck by another unusual phenomenon created with water – sea foam around several still-standing live oaks on the beach. The foam was a frothy collar around the tree’s base, and the bubbles in the light filtered by sea fog were beautiful. 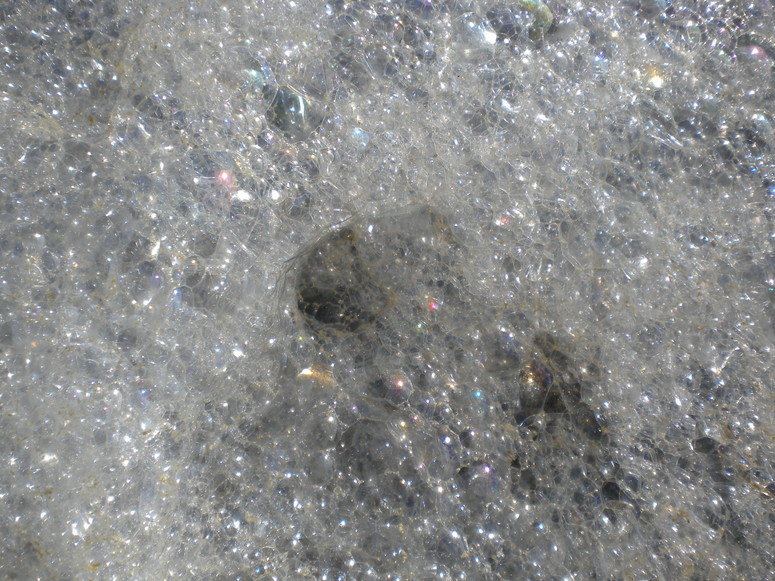 Resisting the temptation to linger and be lost in this fog enshrouded world, I began the walk north to return to Kingfisher, and was aware of the turn of the tide. Past the Boneyard the debris washed up at the high tide line was impressive. 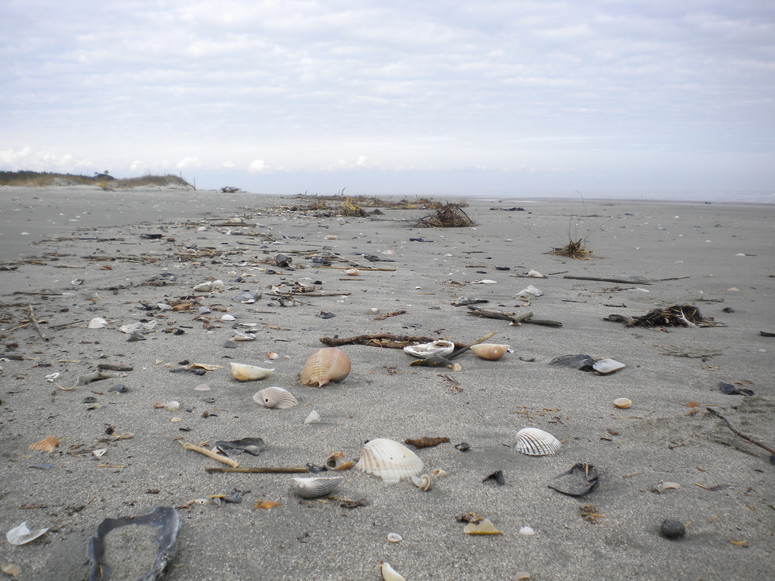 I gradually walked out of the fog as it dissipated once again. I took my shoes off to wade across the first of two tidal creeks. The wind reappeared again as I continued, finding the dune area completely gone, and the sand flattened all the way back into the marsh before the dike.
One shell stood out – the scotch bonnet, Phallium granulatum. [I have since realized that this initial identification was incorrect, and this was a shell in the tun family]. 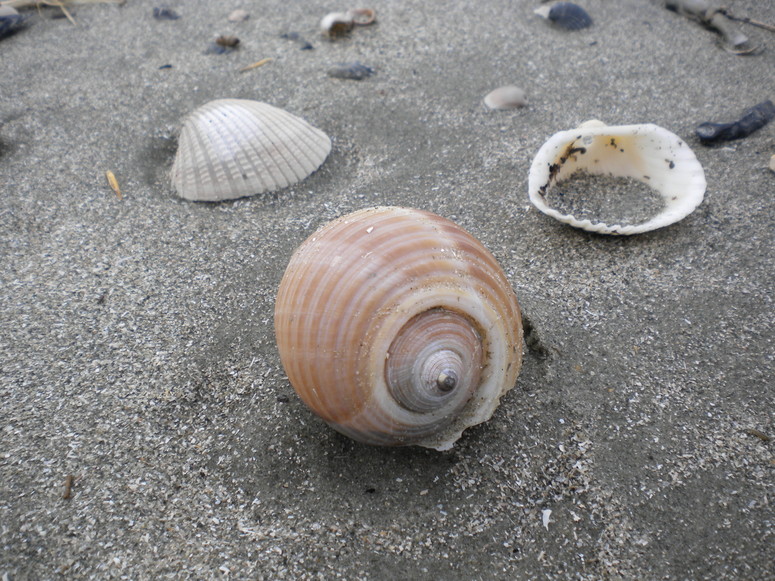 I found a place to cross via a little shell island at the last tidal creek cutting through the beach. The walk around the point carried me back to Kingfisher, with about ten feet of beach remaining between the transom and the incoming tide. With the once again solid south wind, the sail across promised to be easy and swift.
The point of sail was a beam reach, and the conditions had returned to gray. I snacked on the passage, and daydreamed until coming into the mouth of Andersonville Creek. I reflected how pedestrian this crossing of the bay had become for me, no doubt due to the favorable conditions. I passed one anchored outboard along the creek, and chatted with the couple in passing, commenting on the unusual narrow black cloud crossing from the mainland to the island. I was glad to be cruising toward home. In the last section before the Waterway, another great blue heron stood on the bank before flying off, and a kingfisher flew and landed on a bamboo marker on the point. The usual dropping of sail, paddling in, landing, and hauling out followed.
I recalled the previous Monday – a very cold, sunny afternoon. I made one last bike ride in the afternoon down to the landing, bringing along a pair of binoculars. The late afternoon winter light was crystal clear with the backdrop of a cerulean sky, and the glasses stretched my vision far out over the marsh to Bull Island itself. Focusing on the bird life, I picked up a pair of large birds in flight over the marsh. The lead bird was a wood stork, and behind it a bald eagle. The wood stork flew down into a cleft in the marsh – seemingly a canyon, created by a creek at low tide (Venning Creek). The eagle also dove and disappeared into the canyon, as if in pursuit. I watched for a while, but did not see either bird again. What happened in the brief drama? It has remained a mystery, but a moment stored vividly in my mind.