I’ve been on the move: not on Kingfisher, and not on the water but many miles on the road. These travels have taken me from the coast to the piedmont and the mountains. Though the movement has been for a meeting, a conference, and several weddings, I have taken the opportunity on these trips to explore the natural world.
Echaw. A Native American name for a creek running from the South Santee River south into Francis Marion Forest, smaller than Wambaw Creek to the east. 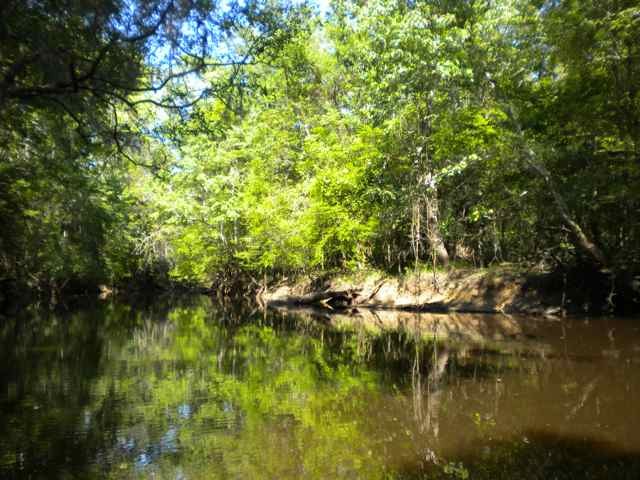 It is easy to imagine prehistoric paddlers floating down the South Santee, and taking a right into this creek, landing at a significant peninsula rising up steeply to thirty feet above sea level. It is a terrific site, now with a swamp house occasionally rocking with live music and recording sessions. After a meeting there in April, we walked around the land, and paddled out the creek to the South Santee River. We observed on a walk the underlayment for this peninsula – limestone deposits, in places exposed like nowhere else I’ve seen in the Lowcountry. 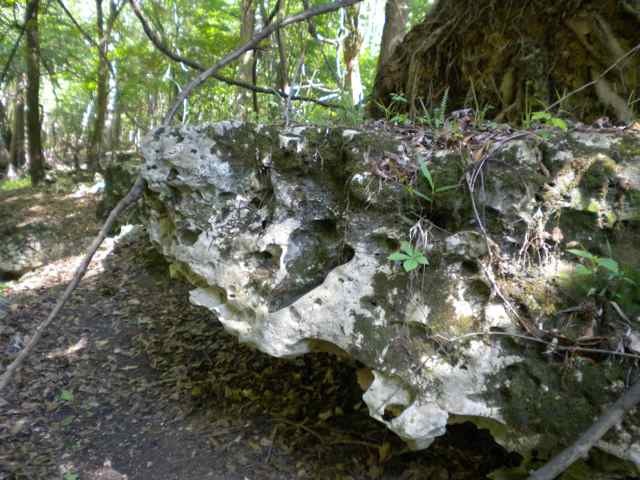 I would speculate that the name Echaw was not just for the creek but for the place. It echoes other places in the Lowcountry – Wambaw, Awendaw, but also the names for the Indians’ hunting islands: Onisecau (Bull Island), Jimecau (?) (Capers Island), and Timecau (Dewees Island). 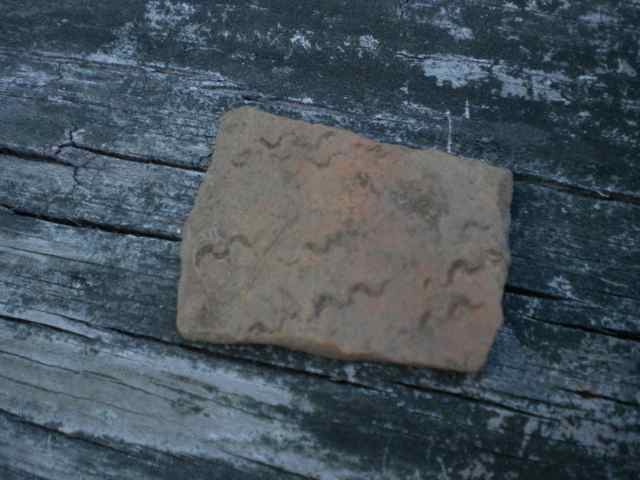 Physically it reminded me of the high bluff over the Great Pee Dee River, a place known by Native Americans as Yauhannah, and now the site for the Waccamaw National Wildlfe Refuge Environmental Education Center.
The limestone outcropping geologically prepared me for a trip to a place I find myself returning to regularly – Great Smoky Mountains National Park. The primary reason for the trip was a conference, the Southeast Recreational Therapy Symposium, but I also planned to arrive a day early, and squeeze in some hikes sandwiched around a night camping in the park. After setting up camp around noon on Monday, I drove to the trailhead and started up the Maddron Bald Trail. The rain chance was fifty percent, and held off as I climbed up the first section of this trail built by the CCC. Before going a mile I came upon the Baxter cabin, an exquisite one room log building constructed in 1889 by Willis Baxter for his son as a wedding present. 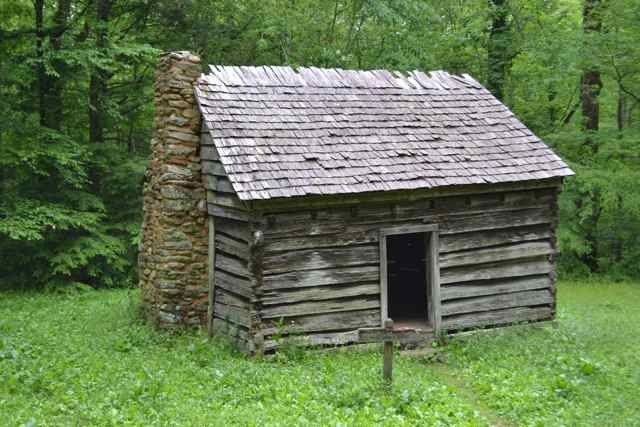 The logs were hewed from a single chestnut tree. It was interesting to imagine this building as a young couple’s new home. 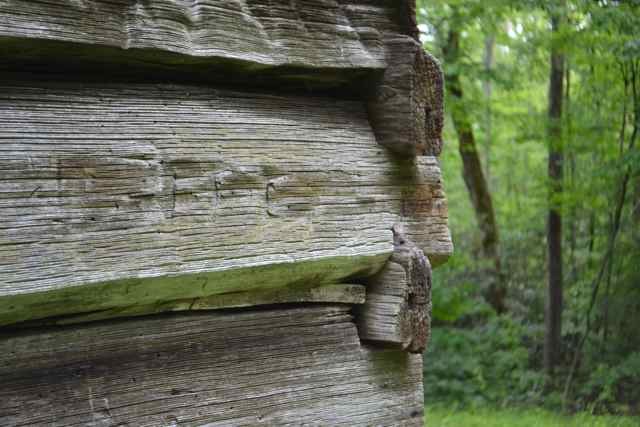 Further up the trail, the green-ness became pronounced, and the trees began to change from younger poplars to much older specimens. To photograph one of those trees and the trail, I worked to frame the shot looking through the viewfinder and backing up. 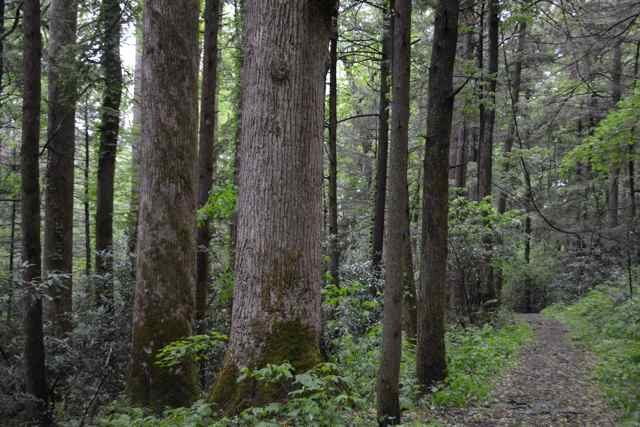 I did not see the log along the trail that took my legs out from under me and dropped me like a sack of wheat. Humbled by this experience, I made a mental note to take care, particularly along prominences.
I continued to climb along this trail, and as the rain finally started I pulled on my rain gear. A destination on this walk was Albright Grove, and a .7 mile loop off the trail takes the hiker through this section of magnificent old growth trees including tulip poplar and hemlock. Experiencing this site was the humbling I sought. The rain continued to come down steadily, enhancing this excellent example of an old-growth cove hardwood forest and displaying the magnificent botany as a rain forest. 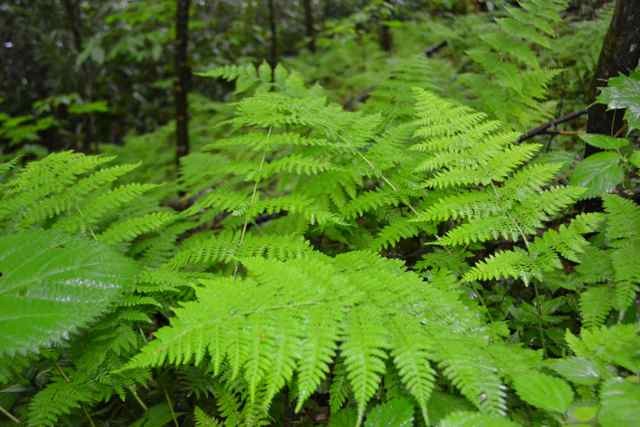 I had the intent of continuing another three miles beyond the 3.7 I had already covered to reach Maddron Bald, and made an effort at going up, crossing several streams where I waded through shallow water. But I did not have the time and disappointedly turned around, planning on returning to this trail in the future. On the descent, some light came through the rain to illuminate a section of ferns that was both brilliant and ephemeral.
After a night of rain that my tent shed well, I packed up the wet gear and drove west through Gatlinburg and up the mountain to my destination at Newfound Gap. A very visited site, it would be the starting point for my walk on the Appalachian Trail (AT) to Charlie’s Bunion and back. At 9AM, the place was as empty as I’ve ever seen. The atmosphere was impressive – the mountains were stuck in the clouds. When I got out of the car, the weather was much different at this elevation (over 5,000 feet), with the wind blowing hard and the temperature at least twenty degrees colder than at Cosby Campground. I pulled on a knit hat, gloves, another layer under my rain gear, and my wet shoes from the previous day, and started up the AT.
I soon left the road noise of Hwy 441 behind, and warmed up, shedding gloves and hat. The Smokies moisture was thick, and rain seemed imminent. The hikers I encountered were heading to the Boulevard trail, which leads to Mount Leconte. One group was planning to stay at the Leconte Trail shelter; another was heading to the peak, and then down Alum Cave Trail. I passed other landmarks as the rain began, and this ridge trail provided some wildflowers not seen the previous day. 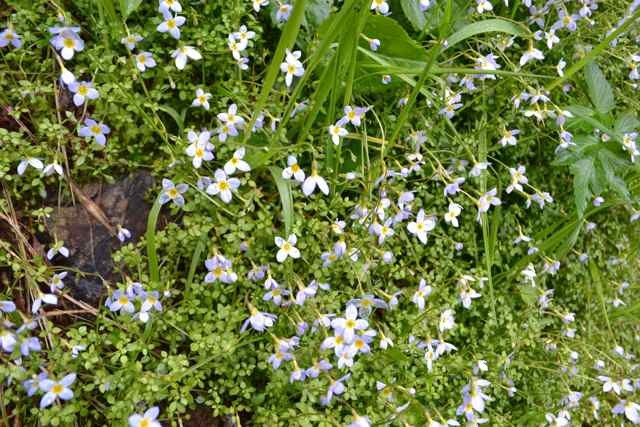 One mountain side was covered with bluets. On the other side were a bed of trilliums, with a few still blooming. 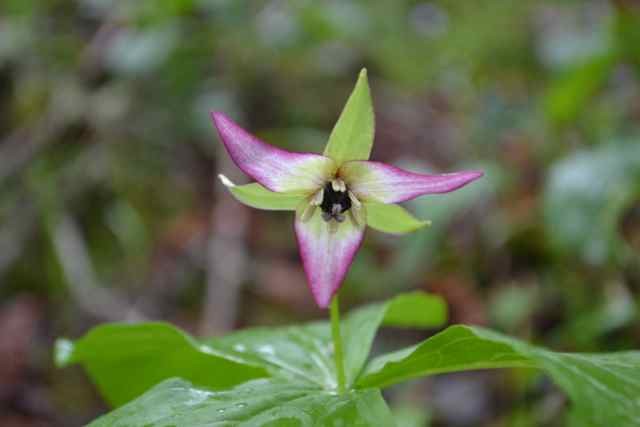 I pushed on to get to the prominence of Charlie’s Bunion, and knew there would be no views today. Instead I was treated to an awesome display of blooming sand myrtles hugging the exposed rock. It was unfortunately raining too hard to risk pulling my camera out, but the world of rain, wind, and rocky blooms was as unforgettable as any clear vista.
The return walk was made interesting with the crossing of paths with thru-hikers. The first hiker was “only” going to Damascus VA, starting from Springer Mountain GA. He talked about the cold nights, and was pleased with the “trail magic” I bestowed upon him – a couple of granola bars. The next thru-hiker encountered was going “as far as I can”. He was a graduate student from Illinois, and though out of granola bars he was immensely excited about the rumpled peanut butter and honey sandwich I gave him. I passed three other hikers – destination Maine –  trucking up the trail.
I came down from the mountain and entered “civilization” at Gatlinburg for a meeting, and symposium. As I have in years past, I organized a hike to a local trail in the Park, and had planned for Grotto Falls, the only waterfall in the Park where one can walk behind the falling water. About forty people carpooled out to the trailhead, and made the walk to and from the falls. On the walk up the trail I remembered clearly my first walk there during a family camping trip years ago. Susan, Sara, Eliot and I went with another family, camping in Elkmont Campground. In the Grotto Falls parking area we saw the unusual site of llamas in trailers, and learned that the llama train supplied the lodge on Leconte. Near the falls, I led an activity with the kids, all under 10. I got them to sit down on a rock, close their eyes, and listen carefully to the stream and mountain. I modeled by doing so myself, but was not prepared for the voice I heard, saying simply “Welcome home my son”. That memorable experience has stayed with me to this day,
The next day Ed Kesgen gave the final endnote of our symposium, and asked everyone in the audience to close their eyes and think of a place in their mind of peace and healing. Though initially my mind went to a stream in the Smokies, it shifted to the Boneyard Beach on Bull Island. After the long drive home, and before arriving at my house, I stopped at the landing to feel the humid southern breeze coming across the waterway, marsh, and in the distance Bull Island
With no rest for the weary, we left the next morning at 6 for a wedding in Wilmington, NC. We hit the sunrise at the Santee Delta, and I stopped for a photo. Mosquitoes and deer flies greeted me, and they and the Delta sunrise were a further welcome home. 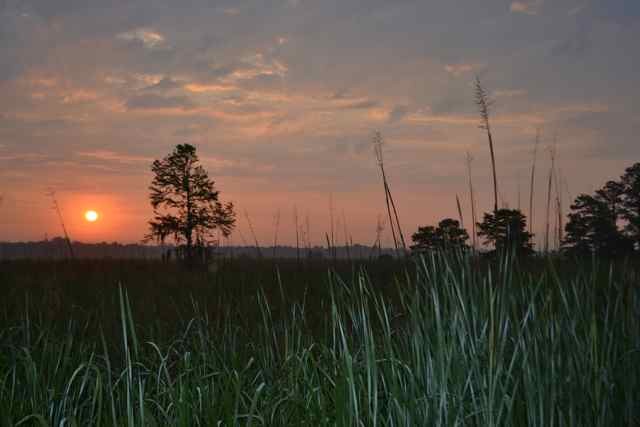