7 AM at the South Island Ferry, and what a surprise – the landing was jammed pack with holiday boaters, getting a jump on the July 4th weekend. I had only seen this landing during the week in the past, and it was always a quiet place with a few boaters and plenty of space. 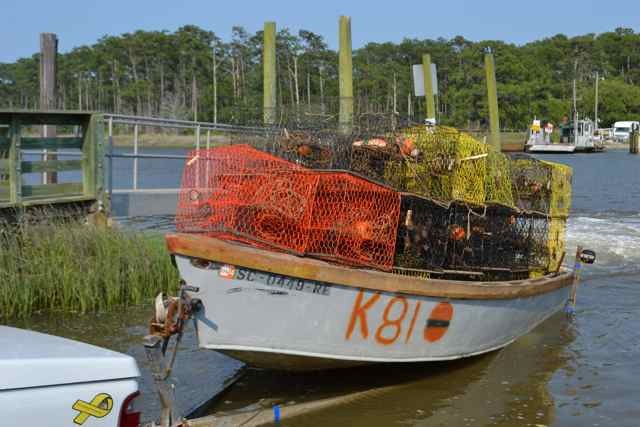 On this Saturday outboarders were already parking their vehicles and trailers on the road outside the landing. I lucked out launching Kingfisher when I found a prime space two spaces away from the ramp after several boaters hauled their boats out. I was definitely the odd duck – a sailor with a Sunfish amongst all the outboards. A second surprise was the tidal flow, which I anticipated to be ripping south from the incoming tide pushing from Winyah Bay. I was mistaken – that tidal vector was a figment of my imagination, and in the journey south I was to find the tide opposing our course. The marine forecast called for SE winds at 5 knot, and later 10 knots, but the wind was absent, and I did not bother to raise sail as I cast off and began to paddle south.
Kingfisher as canoe – this was not the first time, and I recalled paddling on the first leg of trips out to Bull Island and other islands in the archipelago. After thirty minutes, it was clear I was paddling against a little current. I steered Kingfisher over to the marsh along the mainland side to stay out of the flow as much as possible. There was a very high bank sloping up through the trees, unnatural and clearly the result of the digging of this section of the Intracoastal Waterway (ICW), known as the Esterville Minim Canal. I continued to look ahead for any sign of the wind coming up, but after an hour no luck. I paddled on. Outboards motored by occasionally, though I suspected most boats from the landing were heading for Winyah Bay and beyond.
Two hours, and still no wind. Dead Spartina floated in lines due to the high tide, and I needed to clear the daggerboard and rudder occasionally of the drag. In the morning heat, a tiny waft of cool air came in, and I leapt to the halyard. As I raised the sail Kingfisher turned into the wind direction, which was from the NE. This wind did not relieve the need to paddle, since it was very light and variable, and I knew it would eventually die before the true sea breeze came up from the southeast or south.
Occasionally I would stop paddling, and Kingfisher‘s progress would halt. I found a shift to the south, which meant I needed to tack to keep wind in the sail, and was crossing the ICW back and forth while paddling. I had seen a small alligator earlier, and ahead saw a large one swimming from Cat Island to the mainland, its black back and tail exposed on the surface. An ICW marker materialized in the distance to the south, and in drawing closer I realized on my chart that it was marking the confluence of a number of waterways: Minim Creek, the dug canal of the ICW, and the waterway heading out to North Santee Bay – my course. As I approached it, my plight came to an end (after three hours) with the arrival of the sea breeze. I sheeted in, and stowed the paddle as we sailed into the entrance to North Santee Bay. Two young men and a pre-adolescent worked a very weathered and repaired workboat, pulling and dumping crab pots. As I passed I asked about the catch – “It’s fair”.  They eventually finished these pots and careened ahead into the bay with a roar, and we followed into the widening watercourse.
I was released into a new world, feeling the freedom of plenty of water, no other boats, a medium breeze with smooth waters, and the beginning of the outgoing tide, helping to push us toward the destination of Cedar Island in the distance. Even though beating to windward, I was free on long tacks between Cat Island and Crow Island, sitting on the side in the maturing wind. I entered into a zone of sublime windward sailing. I decided to tack along Cat Island in search of Mosquito Creek. Why? It actually is the waterway, if you could call it that, separating Cat Island from South Island in the Yawkey Wildlife Center. I had asked Jamie Dozier, director at Yawkey, if you could navigate Mosquito Creek from North Santee Bay to Winyah Bay at high tide. He was very doubtful, even if attempting it in a kayak with a full moon high tide. Such a trip spun in my mind as I passed the creek mouth, a very promising opening that Kingfisher could run through for some distance. But getting back…
A house appeared incongruously on Crow Island. It protruded above the marsh, but only from a different perspective later could I see that it was located on the North Santee River side (I learned days later it was a hunting camp on Cane Island). I tacked back over to the South Island side, where several crabbers were working. A tower rose along a point stretching out in the marsh, and farther on the maritime forest stood prominently on the island. The bay arced to the southwest, and the view exposed the inlet, ocean, and Cedar Island to the southwest. We made long port tacks now, and I could see sandy beach ahead in the distance on Cedar. This beach appeared to have extensive sections of marsh, but it was an illusion as I noted on my chart – the grassy areas were small marsh islands in this section of the bay. One more tack over to South Island, and then a long leg to Cedar Island. The beach appeared to have some slope for a landing, and I found a half buried tree low on the beach to fasten Kingfisher. I was up on the beach, and secured the craft in a jiffy. 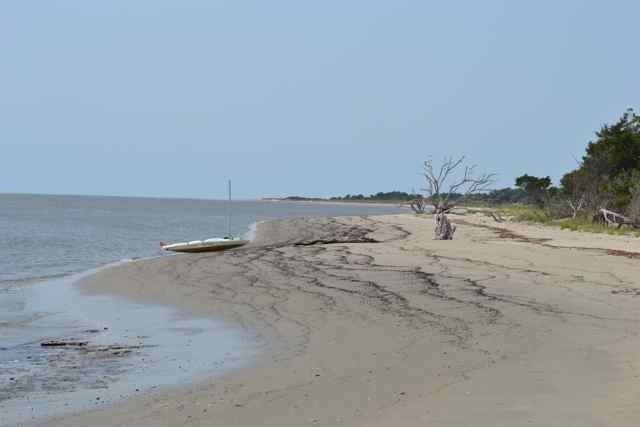 I was surprised to find myself the only boat on the beach, though other boats were in the river mouth, on South Island, and out on the shoals.  On the paddle and sail my brain had been recalculating times for completing the trip out to the island, walking the beach from the North to the South Santee River and back, and making the return sail. As I began the walk I knew that I would complete it, despite the ordeal to arrive on this most central and seaward piece of the Santee Delta.
I wandered up to the dunes to peer into the island, and wondered if there were any trails or roads to access the interior. 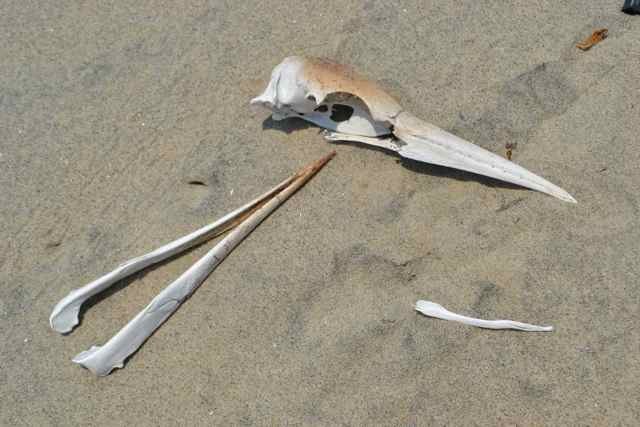 Along the way a bird skull appeared in the sand, perhaps of a royal tern. At the point pelicans and terns stood, framed in the background by the river mouth and South Island. 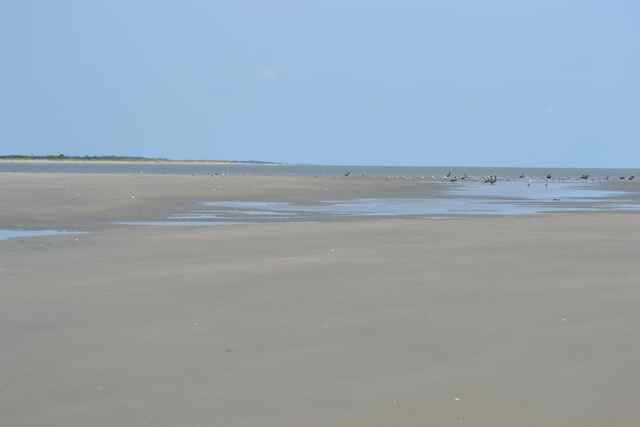 A cluster of shoals spread outside the North Santee.
Walking around the dunes at the point I came upon a dramatic sight on this clear day: the most familiar image of Cape Island, Lighthouse Island, and the 1857 lighthouse to the southwest. All the maritime landscape for the previous hours was new, and to see this familiar place was both startling and orienting. The front of this beach had good sized dunes on the ends but eroded areas with minimal frontal dunes in places in the strand’s middle. 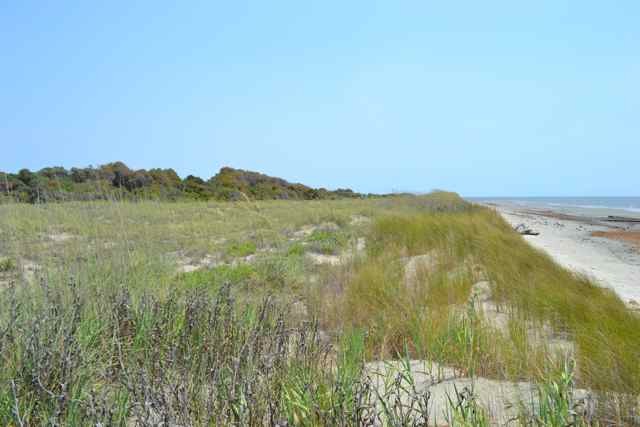 A wide dune field was located behind the primary dunes, and a smaller secondary dune was the boundary from the interior of the island. Some of the habitats observed beyond the dune field were maritime forest, salt shrub, and toward the South Santee a long finger of marsh extending into the island. 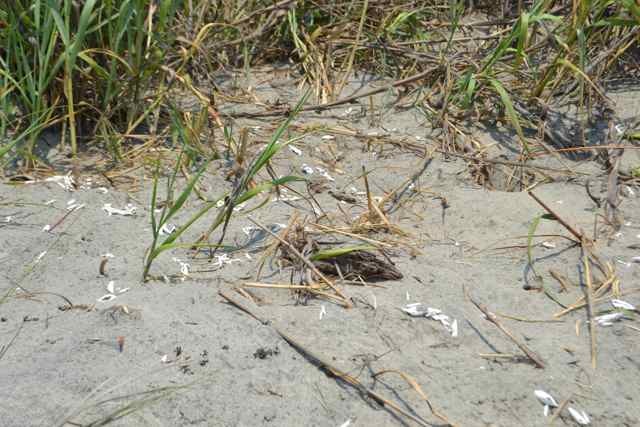 There were few good spots for loggerhead nesting, and in a couple of the more promising places I found the remains of nests that had been “cooned”. There was also an incredible density of derelict crabs pots washed up on the beach, more than I have ever seen anywhere. 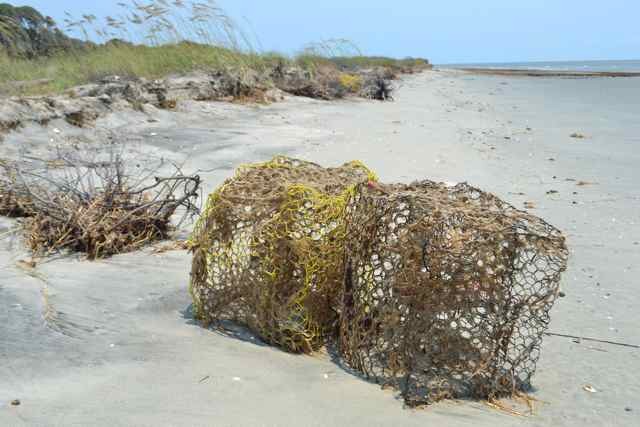 How many more lost pots were also sitting on the bottom of the creeks, waterways, and bays?
Several people appeared on the beach ahead, and I knew I was getting closer to the South Santee. 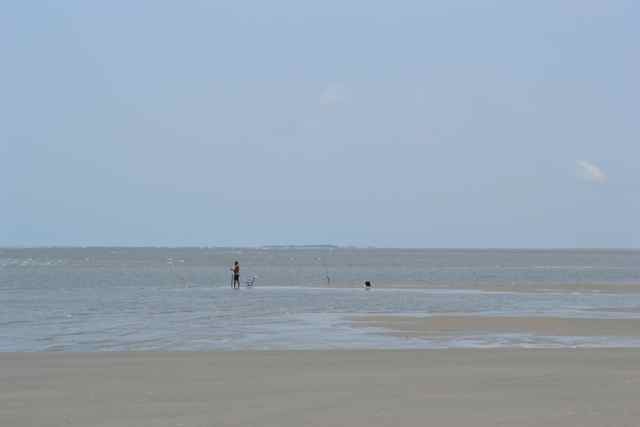 The distance from one river mouth to the other was shorter than anticipated, and I made a point to go the distance. 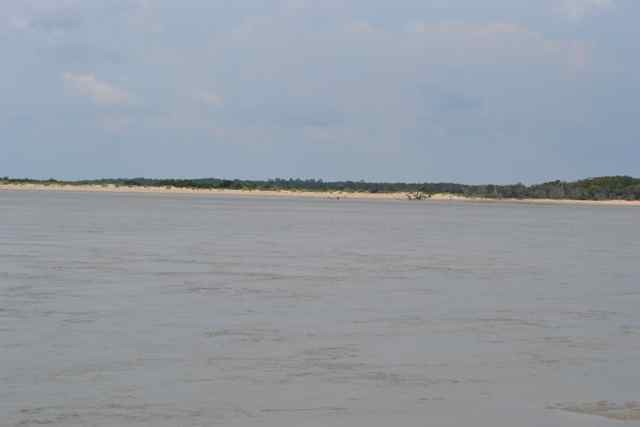 After tagging the point, I turned and headed back with relatively plenty of time. This walk was easy, and my mind wanted to explore further, to penetrate into the interior of the island. I pulled on long sleeves and started back into the dune field. A bleached live oak appeared alone in this zone and gave some idea of the island’s retreat. 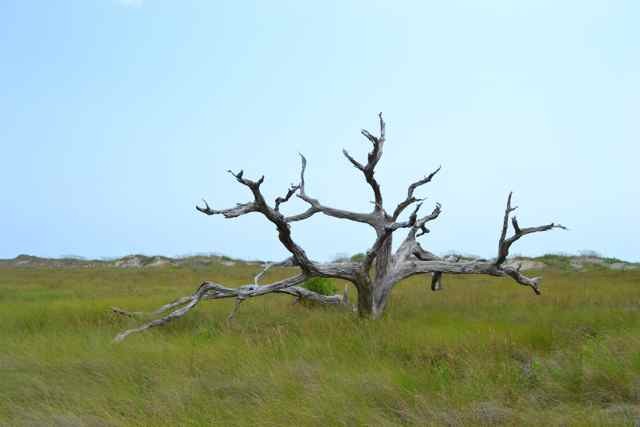 At the secondary dune, I walked through a wildlife path and continued into wax myrtles. This was a brief transition before it opened up into a wetland from the South Santee. Despite the drought, mosquitoes crowded around me, and I returned to the breeze in the dune field. 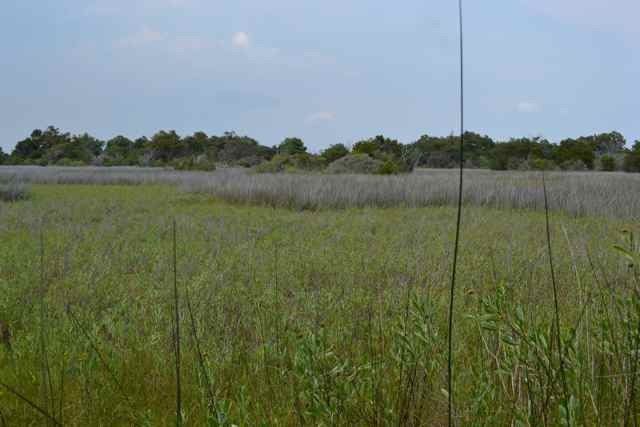 I walked the line of the secondary dune to a place where a wash through in the beach had left a shallow pool. A cluster of bleached and uprooted cedars lay nearby. It was easy to reach the strand from this spot. 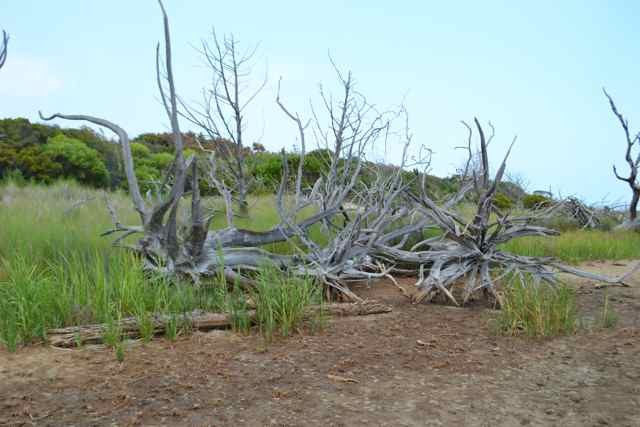 I retraced my steps, faster when hearing some thunder in the distance. The thought of losing this breeze was not palatable. I stopped to view a ghost crab out in the daylight. 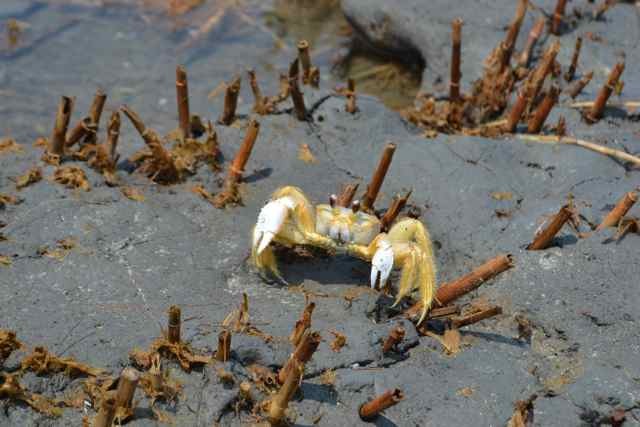 The tide was close to low, but the slide of Kingfisher down the bank was all downhill. There was still some outgoing tide as we took off downwind. 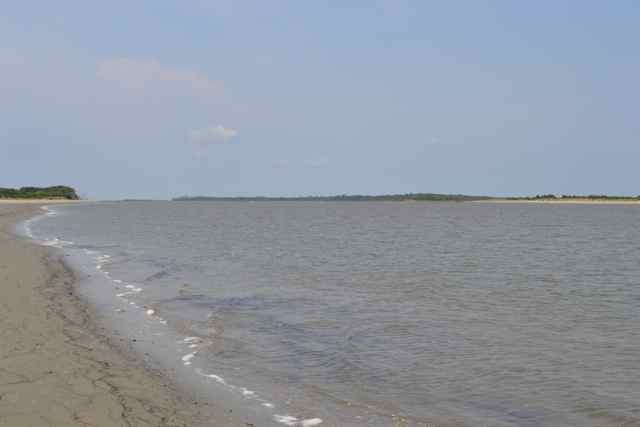 We ran into the bay, and after a few minutes I looked ahead to see not just those marsh islands, but mud flats directly ahead. My chart had no soundings. I changed course to sail along South Island, and continued in the solid wind until the arc of the bay necessitated a jibe to the northwest. This new course brought Kingfisher up on a broad reach, and a solid plane. Nearing a fishing boat along the bank, Kingfisher‘s daggerboard, pulled half up, struck something, and then again. There seemed no other good options – all the outboards had followed this course, so I pulled the board up further and kept on. Without further touches, we jibed into the waterway leading to the ICW.
The run in the ICW was dead downwind, and with low tide the waterway was much narrower than during my morning paddle. A good sized cruiser from Washington NC had a full wake, but slowed considerably for the passing. I thought about surfing on this wake but there was not enough waterway for that possibility. I moved over to the Cat Island side to take a closer look, and two pines in a quarter mile section contained large birds of prey nests. I anticipated a crowd taking out boats at the landing, and prepared for this action, noticing a strong flow coming against us from Winyah Bay. A large outboard was dropping off one of the crew to back the trailer, and as I prepared to come in he returned to drop off another crew. After a second aborted run in, I rounded his stern and came up along the first dock while I dropped sail, coasting almost beyond the second dock before steering and paddling in. The sail back from Cedar Island of about two hours contrasted strongly with the five hour paddle and sail out. The fine run home was a glorious coda for this Cedar Island adventure.